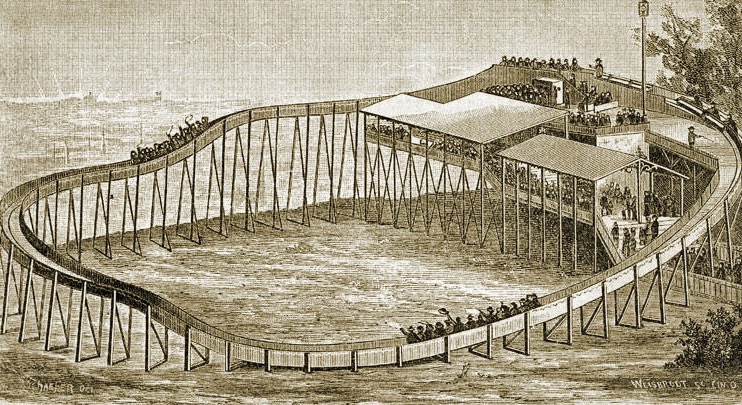 The featured image above is courtesy of the Jim Abbate Collection.

Alanson Wood was an inventor who was born in the State of New York in 1829. He married Lovinia H. Wood (her maiden name is unknown), born in 1830, and had one child, a daughter named Lucy.

In 1881, he filed an application for a patent for an improved roller skate, which generated a large sum of money for him.

During the winter of 1882-1883, Wood came up with an idea for an amusement ride he would call a Circular Gravity Railway.  On August 8, 1883, Wood filed an application for a patent for a Circular Gravity-Railway, based on a design he thought of after conceiving the idea when seeing children playing on double runner sleds going around in large circles. His idea caught the attention of Joseph A. Cahoon, and he and Wood struck a royalty deal for the patent. Cahoon then advertised the Circular Gravity Railway, and he ended up in business with Philo M. Stevens, who built the first Circular Gravity Railway which debuted at the Tri-State Fair just outside Toledo, Ohio, in September 1883.

The patent was granted on January 1, 1884, and Wood and Cahoon were assigned one-half of the patent. Since the patent application predated the construction of the first Circular Gravity Railway for the Tri-State Fair, the patent did not have a model. The also patent did not claim any specific way the trestle-work was to be built, nor the style of cars to run on the ride. At the peak of the Circular Gravity Railway construction, Wood received $17,000 in royalties in one year.

After Stevens built the first Circular Gravity Railway, he made improvements upon the design which led him to file an application for a patent on a new version of the railway, which he called a “Roller Coasting Device,” on October 16, 1883. The patent was granted to Stevens and his company, the Roller Coaster Company of America, on May 13, 1884. This is the first instance of the term “roller coaster” being used for this type of amusement ride.

That patent was followed by a Gravity-Railway patent which was filed on January 8, 1885 and granted on May 5, 1885, by Charles H. Alcoke. Alcoke sold a handful of his circular Gravity Railway, including one which was installed at Penn Incline Resort in Pittsburgh, in 1885, the first roller coaster installed in Pittsburgh.

These other patents could not happen without Wood’s original concept. Because of this, he was often credited thereafter as the “inventor of the roller coaster,” including in his obituary. Once he died, however, he was quickly forgotten to time, despite his contributions abroad and in Toledo, Ohio.

Wood continued to develop new ventures, focusing on developing aircraft. In 1902, Wood participated in the International Airship Regatta, using a racing airship. The following year, he began work on a new airship, which he planned to debut in 1904, with the goal to fly his craft to the Tri-State fair grounds near Toledo.  Of course, in that time, the Wright Brothers famously flew their airplane at Kitty Hawk, North Carolina. It’s unclear if he flew the airships or if he had a driver fly them – he was 73 years old in 1902.

Other businesses he had included taking the money he earned in royalties from the circular gravity railway, and investing that in several properties in Toledo, during a land boom in the late 1880s/early 1890s. This investment went bust during the Panic of 1893.

In 1906, Wood filed a lawsuit to recover $100,000 worth of property that was held by Michigan Mutual Life Insurance Company. During the Panic of 1893, Wood alleged that he made an agreement with the company to provide money for the construction of an apartment he wanted to build. When he needed more money to continue the construction project, Wood alleged that the bank refused and instead gave him an ultimatum: be foreclosed upon, or take a deal. The deal was a lifetime annuity payout of $500 or $1000 (some sources say $500 while others say $1000) in exchange for the property he owned. This deal was highly favorable to the company, which is why Wood was alleging fraud. He believed that the company tricked him into the deal, on account of his age.

Michigan Mutual Life Insurance Company claimed they never owned the property referred to in the lawsuit but that they did hold a mortgage on it but, Wood never paid on the mortgage which is why they offered the deal. Because they didn’t own the property, they believed they had nothing to do with the suit. Since they didn’t own the property, there was nothing they could give back to Wood. A resolution to this lawsuit has not been found.

Wood appears to have been living in Wysox, Carroll County, Illinois in 1850. He was living with the Baker family, also from New York, as a farmer. It was said that Wood lived something of a pioneer life in his earlier years, so this seems to be an approximate match to that description – he would marry his wife Lovinia sometime in the 1850s – also born in New York – and they moved to Michigan sometime before 1859 – their only child Lucy was born in Michigan in 1859.

A description of Wood’s life says that he lived something of a pioneer life in his earlier years, so if he lived in Illinois working as a farmer, and then relocated to Michigan, this seems to match that description. He was described as not having a lot of money at that time, which does match up with him getting most of his wealth from his improvement to the roller skate in 1881.

After the Civil War, the Wood family relocated to Toledo, Ohio, where they lived for the rest of their lives. In 1877, at the age of 17, Lucy passed away from unknown causes.

Alanson Wood passed away on May 4, 1909. According to his death certificate, he passed away at 9:30am, due to paralysis which was contributed by feebleness and old age. He was 80 years, 2 months, and 24 days old. Lovinia passed away slightly more than four months later on September 5, 1909. They are both interred in Woodlawn Cemetery in Toledo.

3 comments on “Alanson Wood | Inventor of the Roller Coaster”