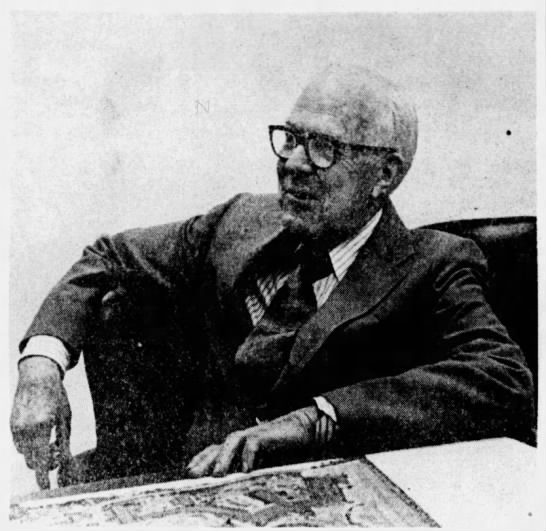 This is a biographical profile of Randall A. Duell, one of the preeminent amusement park designers of the 20th Century. But not only was he distinguished for that – he was also a long time art director for MGM Studios from the 1930s to the 1950s, being nominated for several Academy awards.

Randall A. Duell was born on July 14, 1903, in Luray, Kansas. Duell’s family relocated to California in 1912, and Randall Duell was able to experience amusement rides at the 1915 San Diego Fair.

Duell attended the University of Southern California School of Architecture. Due to a slowdown in construction business because of the Great Depression, he joined Metro-Goldwyn-Mayer Studios (MGM) as a set designer.

Through his career at MGM, he reached the level of Art Director. Duell was on one of the highest levels for an MGM employee (one newspaper labeled him one of MGM’s “big shots”). He would often travel to potential filming locations as part of the negotiating team to reach an agreement with the location of interest.

Duell retired from MGM in 1959, and re-entered architecture because he was interested in working outside of motion pictures. In the wake of leaving MGM, he went to design firm Marco Engineering and co-designed several theme parks including Pleasure Island, in Boston, and Freedomland, in New York.

He and his wife Rachel formed R. Duell and Associates (R. Duell), with Rachel as the business manager. The first theme park R. Duell designed was Six Flags Over Texas, which opened in 1961. The success of the first Six Flags park put R. Duell firmly in the position of being the premier amusement park designer.

“We want no mad people. What we do want is to please them so much that they leave there with a smile, thinking, ‘my, what a good time we had.’ This is our basis for our whole design.”

Subsequent amusement park projects included (this is only a partial list):

“Duell was called ‘since [Walt] Disney’s death the No. 1 force in theme park design’ by the Encyclopedia Americana.”

As mentioned, Duell was born on July 14, 1903. His parents were Lewis and Sarah Duell. He was the Duell’s second child, having already had a daughter, Gwendolyn, born in 1901.

Duell met his future wife Rachel and they married in 1925. They had a child, Roger, which was based on Rachel’s maiden name. Roger eventually joined R. Duell and Associates in his professional career.

This is the first in a series of biographical articles on The Amusement Parkives. Look for more profiles on important people related to Hersheypark, West View Park, or the amusement park industry in general, in the future.

3 comments on “Randall A. Duell”