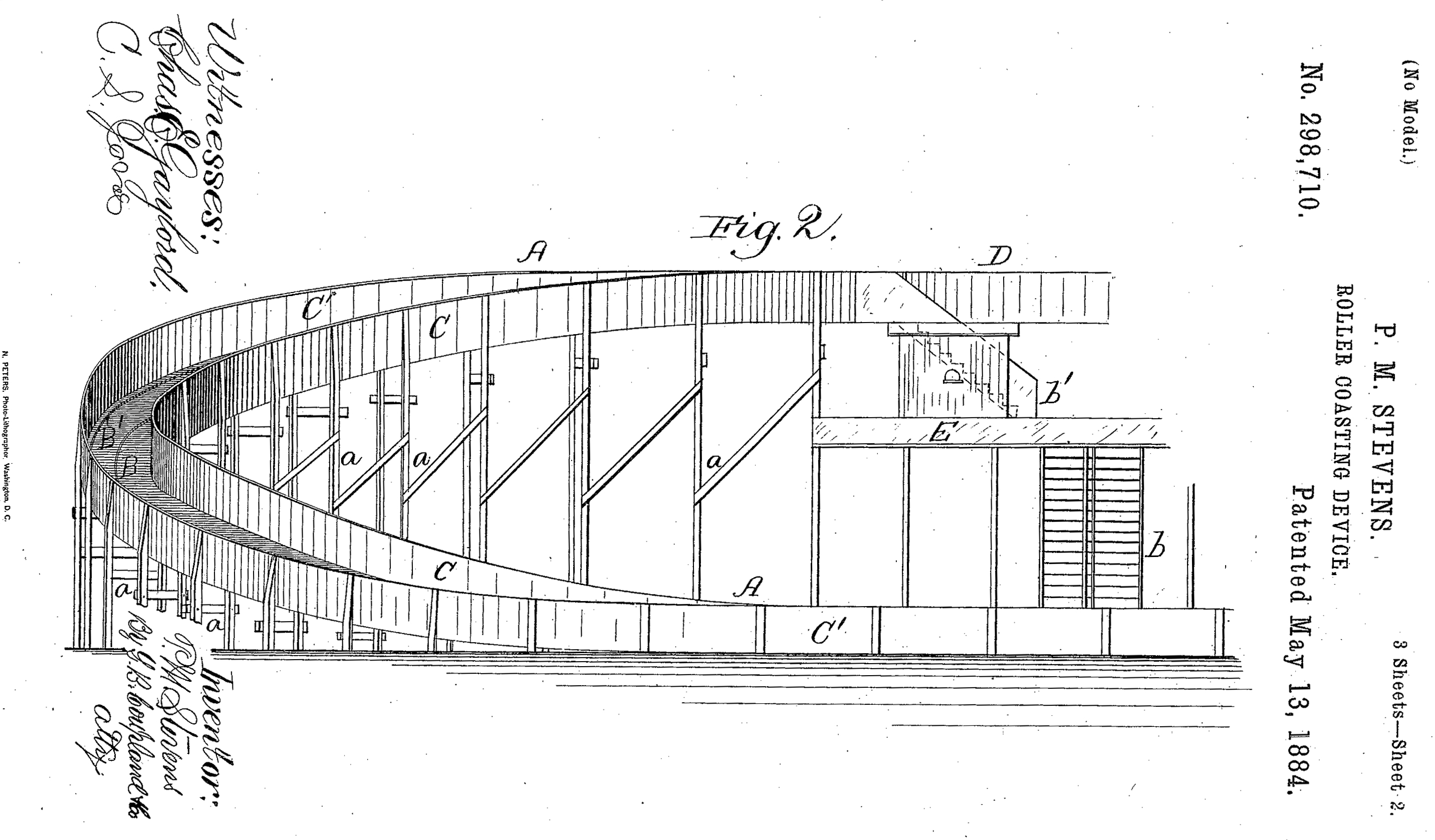 In 1884, La Marcus A. Thompson debuted his famous roller coaster at Coney Island – the Gravity Pleasure Switch Back Railway – commonly believed to be the first roller coaster. This common belief is just a myth. While Thompson’s Switchback brought roller coasters into the cultural zeitgeist, there were roller coasters which existed in prior years.

Let’s take a look at the roller coasters which existed in 1883.

The earliest roller coaster of 1883 found to date, was a circular gravity coaster which operated at the Tri-State Fair. This roller coaster was designed by Alanson Wood, of Toledo, Ohio.  Wood filed for a patent for his design on August 8, 1883, which was approved and patented on January 1, 1884.

An article in The Minnesota Tribune, August 5, 1884, said of Alanson Wood:

In the winter of 1882 and 1883, Alanson Wood of Toledo, Ohio, conceived the idea, from seeing the boys consisting on double runners, of an invention by which the same sort of sport might be indulged in the summer as well as winter. With this in mind, he began the erection of the first roller coaster, a machine 400 feet in circumference, and 20 feet high at the highest point.

Alanson Wood sold half of his patent, while it was still pending, to Joseph A. Cahoon, who also lived in Toledo. Cahoon began advertising these roller coasters –  Philo M. Stevens, also of Toledo, ended up becoming involved with Cahoon. Stevens built several of these roller coasters, including this one at the Tri-State Fair, which operated in September 1883. Stevens and Cahoon would go on to build several more of these coasters (which are discussed below).

This roller coaster at the Tri-State Fair was 600 feet long, could accommodate between 15 and 20 people per ride, and was reported to approach speeds of a mile a minute (60 miles per hour).

On September 30, 1883, a roller coaster for the South Side of Chicago was announced in The Chicago Tribune.

This roller coaster was built by Philo M. Stevens. It was 22 feet high, with the coaster having a diameter of 140 feet and a circumference of 430 feet. There were two trains of six cars, and each car could fit six to nine people. The cars ran on iron rails and the sides of the track were closed in, to prevent derailing. The train was able to complete the circuit in 18 seconds.

This roller coaster was called The Roller Coaster, and cost $800 to construct ($18,500 in 2017 US dollars). There was a five cent charge to ride. It was located at the intersection of State Street and Twenty-Second Street. (Twenty-Second Street was later renamed Cermak Road, after Chicago mayor Anton Cermak, who was killed during an assassination attempt on President Franklin D. Roosevelt, in 1933.)

In May 1884, Alderman Shorey presented a petition to the Chicago City Council requesting The Roller Coaster be removed. The petition stated that the roller coaster was “a source of danger and was a nuisance” because it “gave opportunity for the congregating of boys and girls until late hours at night.” It was reported, “The Council referred to the Chief of Police and the Commissioner of Public Works, with power to act.”

This was another roller coaster designed by Philo M. Stevens. It was reported in The Chicago Tribune article from September 30, 1883, that Stevens was going to be building another one of his roller coasters in New Orleans.

This ride was also named The Roller Coaster, just as Stevens’ ride in Chicago had been named. Another name seen for this roller coaster was Roller Coasting Rink. It was located on the southwest corner of St. Charles and Josephine Streets in New Orleans.

On the morning of November 26, 1883, strong winds from a cyclone destroyed The Roller Coaster.

A new roller coaster was built in New Orleans in 1884.

On September 29, 1883, advertisements began appearing in the St. Louis Post-Dispatch for a roller coaster at the intersection of Lucas Place and Twentieth Street. It was reported in the Toledo Weekly Blade on October 4, 1883, that one of Alanson Wood’s roller coasters had been sold to “a ward in St. Louis.”

This roller coaster operated in September and October of 1883.

There is a report of a roller coaster being in San Antonio, Texas in December 1883. It was reported that people enjoyed “roller coasting” on Christmas. Also, there are reports in March 1884, of a roller coaster which was being renovated and relocated, implying it operated in 1883.

These are the currently known roller coasters which existed in 1883. It is possible that one other roller coaster was built, although it may have been experimental and never operated for the public. If more roller coasters from 1883 are discovered, I’ll update this article at that time.