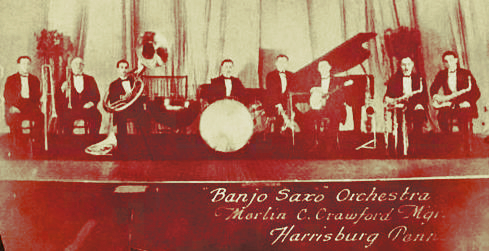 Hersheypark has had many jazz orchestras and bands appear at the park throughout the years, especially between the 1910s to 1960s. One regularly scheduled resident performer for the first half of the 1920s was a group called Banjo-Saxo Orchestra of Harrisburg. The name of the band came from two of its prominent instruments, and they were a very popular Harrisburg jazz band, led by their drummer, Merlin C. Crawford. Here is a history of the Banjo-Saxo Orchestra of Harrisburg.

The Banjo-Saxo Orchestra started out as F. Marian Sourbeer’s Dance Orchestra. This orchestra was established by F. Marian Sourbeer, Jr., sometime around 1914. They became popular in South Central Pennsylvania, playing for events at the Brunswick Hotel in Lancaster, Williams Grove near Mechanicsburg, Armory Hall in Lebanon, or regular shows at Winterdale Hall in Harrisburg. The band played for about five years, when it was announced that the Orchestra was moving in a new direction.

Advent of the Banjo-Saxo Orchestra

During the last week of February 1919, there was an announcement published in regional newspapers regarding the end of Sourbeer’s Dance Orchestra.

Published by a new band called the Banjo-Saxo Orchestra, managed by Merlin C. “Buzz” Crawford, the announcement stated that as of March 1, 1919 Sourbeer’s Orchestra would no longer exist and that it was replaced by the Banjo-Saxo Dance Orchestra. The announcement stated that it was retaining the same personnel as the original orchestra, but was not retaining Sourbeer, forcing the name to be changed from Sourbeer’s Dance Orchestra to the “Banjosaxo” Dance Orchestra – the word banjosaxo is a combination of banjo and saxophone. It’s not clear why Sourbeer, Jr., departed from the group.

The band included the following musicians:

In the summer of 1919, Hersheypark contracted the Banjo-Saxo Orchestra to play every Wednesday and Saturday night. This was a widely commended, even from The Hershey Press (albeit the hometown paper, they weren’t often to comment on bands playing in the park). This was a shrewd move on the park’s part, especially since the band was only a few months old.

They were able to make this decision largely thanks to Crawford’s previous employment. According to his 1917 World War I draft card, Crawford was employed by “M.S. Hershey” as a musician. This meant that Crawford was working for one of the Hershey interests in town – the park, as they had their own house band for vaudeville and silent movie shows in Hershey Park Theatre.

They were often signed to play a run of shows in mid-to-late summer (July-August). The band was also signed to play at one or multiple seasonal holiday events (May Hop, Memorial Day, Fourth of July, or Labor Day).

The orchestra played at Hersheypark most years between 1919 and 1925.

The band continued to play for about six years. In 1923, the orchestra released their first recorded music, through Gennett Phonograph Company. Sold for 75 cents ($11.35 in 2020 US dollars), the songs Dearest and When Will I Know were pressed on a 10-inch double-faced record produced By Gennett.

Better known as Gennett Records, this company was a well known record label that worked with artists such as Jelly Roll Morton, Duke Ellington, Gene Autry, and King Oliver’s Creole Jazz Band (the band also featured Louis Armstrong early in his career). Gennett is best remembered for their connections with early major talent in jazz; the height of the label’s popularity was in the 1920s.

The end of the Banjo-Saxo Orchestra

In 1926, the orchestra took on some new venues, all within the state of Ohio. This was their first time touring out-of-state, with the orchestra going to ball rooms in Akron and Columbus. One of their notable stops included playing at the ballroom at Coney Island Amusement Park. Coney Island evolved into Kings Island theme park in the late 60s (though a water park exists today on the park’s original site).

Crawford left the Orchestra in January 1927, joining Johnny Whitman’s Orchestra, which had been signed to play Saturday nights at the Penn-Harris in Harrisburg.

Very limited evidence shows that Crawford may have re-formed the Banjo-Saxo Orchestra in 1928, with the band formally adopting a new name: Merlin Crawford and His Orchestra. However, some of the band’s instruments were put up for sale in 1927. Furthermore, there isn’t any evidence that Crawford was signed to play any shows in 1928.

What is definitely known is that in 1929, Crawford and his wife left Harrisburg to live in Washington, D.C.. In 1931, Crawford would take part in another start up orchestra – the National Symphony Orchestra.

5 comments on “Banjo-Saxo Orchestra of Harrisburg”