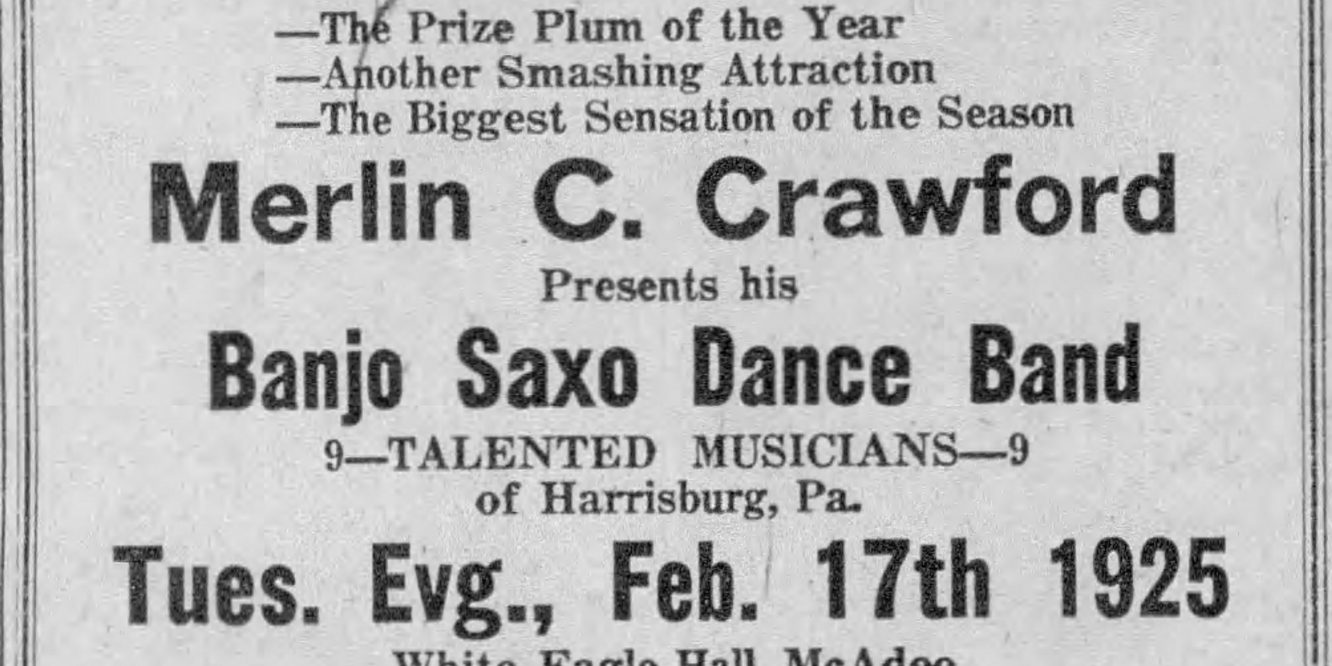 Merlin Cless Crawford was born in Harrisburg, Pennsylvania, on May 4, 1895, to Walter B. (W. B.) Crawford and Laura Crawford née Cless. He was a co-founder of the Banjo-Saxo Orchestra of Harrisburg, and a founding member of the Hershey Orchestra (a predecessor to the current Hershey Symphony and the National Symphony Orchestra in Washington, D.C..

Mr. Crawford . . . was schooled and instructed in the Harry Bower system of modern drumming, by the late Edward Snyder of the famous Conway Band and by Samuel Franklin, well-known drummer and xylophonist. From this, it appears that drumming is more of an exact science than most imagine.

The Crawfords were a musical family

Crawford grew up in the Greater Harrisburg area, first in the city of Harrisburg until approximately 1908 and then in Enola, a few miles away from the city, across the west shore of the Susquehanna River.

Crawford grew up in a musical family, which is evidenced by a couple of things his family did as he was growing up. When Crawford was 11 years old, his parents held a George Washington party in his honor. It was held on February 22, 1907, which at the time, was a Federal holiday celebrating the birth of General, and then President, George Washington.

The Washington party held at the family’s home, 1918 Seventh Street, Harrisburg (today it is a plot of grass). The party featured the West End String Orchestra with dancing provided, while the rooms were dressed up in national colors to commemorate our nation’s first president.

On January 17, 1913, a few months before Crawford turned 18, he participated in a home talent entertainment program at the Pennsylvania Railroad YMCA, in Enola. Crawford was in a comedic sketch called “A Busy Session at Piketown Country School.” It was arranged and presented by Crawford’s father, W.B., and his brothers Walter and Howard, and Merlin himself. Others who performed in the sketch were, according to the Harrisburg Telegraph, January 17, 1913: Heine Picklewart, Johnnie Redd, Willie Green, Ikey Goldsilver, Henry Softsponge, and Crist Kautz. The sketch included recitations, monologues, and songs.

In the fall of 1913, Crawford helped start a new social club in Harrisburg called the Lyre Club. Crawford was president of the new club. They met at various locations around the Harrisburg area, including the Eagle Hotel in the square of Linglestown.

Around 1915, Crawford had joined the Harrisburg Municipal Band. Within a couple of years, he developed into a fairly popular drummer. In February 1917, he was contracted to play in Washington D.C., during inauguration week in early March, which was for President Woodrow Wilson’s second inauguration (Inauguration Day wasn’t moved to January until ratification of the 20th Amendment in 1933).

Return to Hershey and the move to Washington

After returning from Washington, Crawford worked for M.S. Hershey, presumably in the Hershey Band.

In 1920, Crawford became a founding member of the original Hershey Orchestra.

On September 19, 1921, Crawford married Catherine Mauk, of Harrisburg. She was born in 1896, making Crawford about a year older than Catherine. They were married at Fifth Street Methodist Episcopal Church in Harrisburg. In 1929, the Crawford’s relocated to Washington D.C.. Two years later, in 1931, Crawford notably became a founding member of the National Symphony Orchestra (NSO), when he joined the newly formed orchestra as First Chair on drums. The Orchestra is a major orchestra which still exists today. The NSO plays regular shows in the Kennedy Center.

The Crawford’s made most of their money running a rooming house in Washington, D.C., at 2022 Sixteenth Street. On December 14, 1934, Catherine died of an apparent heart attack; she was found in laundry room of their building. No foul play was found. She was 38 years old. Merlin and Catherine did not have any children.

On June 1, 1937, Crawford married his second wife, Lillian Mae Hall. She was previously married to Raymond A. Gallatin and had one child, Richard. They lived in Washington, D.C., as of 1940, while Merlin owned a home in Harrisburg, which he sold in 1947.