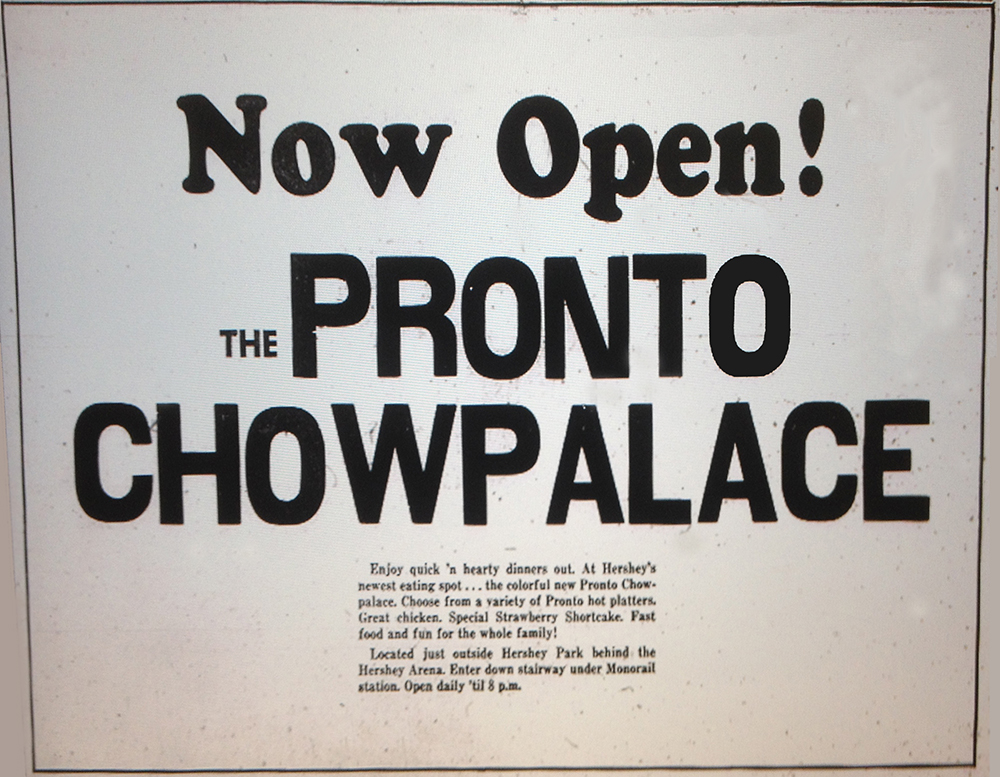 On June 21, 1971, Hersheypark’s first branded restaurant opened. Pronto Chowpalace was set up in the Outdoor Rink behind Hersheypark Arena, which was attached to the chalet which was home to first aid and Rides Office. (This building was replaced with Reese’s Xtreme Cup Challenge in 2006.) The brand was Pronto Foods, which was based in Chicago and acquired by Hershey Foods Corporation (today, The Hershey Company) in 1970.

In 1961, Norman Chapman founded Portion Control Industries, Inc. (PCI), as a specialized food processing company. They produced frozen foods and other items under the brand name Pronto Food Corporation. The company was based in Chicago, Illinois. Pronto was a major player in the market – to the extent that there were some predicting that the Pronto model of specialized food processing may even replace chefs.

On November 12, 1969, Hershey Foods reached an agreement with PCI to purchase and merge PCI into Hershey Foods. The merger was then completed in May 1970.

Chapman then became one of the first “outsiders” – meaning that he was based in Chicago rather than Hershey – to be placed on the board of Hershey Foods Corporation. This occurred on December 10, 1970.

Chapman would then go on to have a second career as an investment banker, forming Chapman Partners in 1995. Chapman died on April 11, 2008, at the age of 80.

In 1970, R. Duell and Associates was hired by Hershey Estates (today, Hershey Entertainment & Resorts Company) to create a plan to renovate Hersheypark. The plan wouldn’t be formally approved until December 1971, with the idea of the 1971 season being a test season. R. Duell provided a number of ideas for park management to consider for the 1971 season.

One such idea was for Hersheypark to have a branded restaurant – something seen in recently constructed theme parks such as Six Flags Over Texas. With the Pronto Foods brand now part of Hershey Foods, that became the obvious choice to be added in Hersheypark.

The location chosen for this restaurant was the Outdoor Rink behind Hersheypark Arena. The Outdoor Rink was an ice skating rink that the Hershey Bears used for practice during the fall and winter months. During the summer time, it was just a concrete pad with a roof.

The [restaurant] will give the impression of eating on a patio with its open sides covered with a roof for protection from the elements.

Pronto Chowpalace opened on June 21, 1971, a little over two months into the season. There was enough seating for 1,200 visitors, according to an official park spokesman. The Chowpalace served Pronto hot sandwiches, Pronto fried chicken, and beverages. They also had one dessert item: a strawberry shortcake.

The reaction was generally very positive to the food and the options, while the biggest criticisms were that there weren’t enough food options, and that service was slower than expected. In 1972, the park purchased some convection ovens so they could have more food choices. This included a variety of Pronto platters, sandwiches, french fries and onion rings, and a few other options. The beverage options and dessert were identical to what was offered in 1971.

The money spent on improving Pronto Chowpalace was apparently not worth it – sales sharply declined in 1972. This decline was based on the general reaction that the food was really bad. Park management found this to be inexplicable, because the quality of the food didn’t seem to change (for them) between 1971 and 1972.

At the end of the 1972 season, it was decided that the Pronto Chowpalace concept was a complete disaster.

Between the dissolution of the relationship between Portion Control, Inc., and the decline of the Chowpalace business in 1972, the restaurant was not brought back for the 1973 season. While this first attempt at having a branded restaurant ultimately failed, it did not scare management away from having other brands come into Hersheypark. For example, in 1976, the park would add a Welch’s pavilion (located where Simply Chocolate is today).

To read more about the restaurants / food stands in Hersheypark, click here.