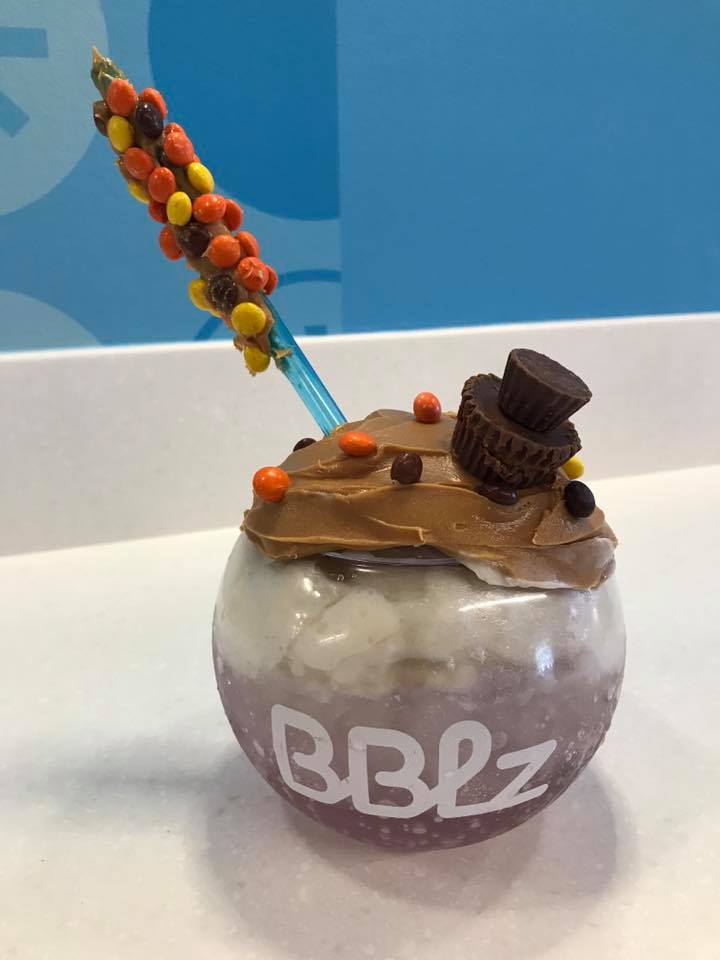 Get fizzy with it! On July 4, Hersheypark happily debuted the first permanent location of BBLz™, where mixologists – a.k.a. Bubble Makers –combine unexpected flavor bases, custom-blended foams and sweet garnishes to give guests an immersive and delicious beverage experience.

On July 4, 2017, a new food vending location opened up in Hersheypark. BBLz (a stylized version of the word bubbles), as explained in an article on Sweet Stores From @HersheyPA (link above), was constructed as an addition to the Overlook Arcade / Restaurant, a substantial change to the building which replaced the old penny arcade pavilion in 1990.

This building is located in Kissing Tower Hill, and BBLz was on the side of the building facing Hershey Triple Tower, which opened earlier in 2017. Hersheypark began teasing the addition of BBLz in April 2017.

BBLz was a two story pavilion with the upper level being where you ordered your drink, and the lower level being a seating area. BBLz offered 7 different drink options including a peanut butter and jelly drink. Many drinks used Mist Twist as one of the base parts of the drink.

Following the 2019 season, BBLz did not reopen. During the shortened 2020 season due to the COVID-19 Pandemic, BBLz was closed. In 2021, signage and equipment were removed in 2021 and the pavilion was renovated for other use.

F!zz was also featured during Super Week in Santa Clara, California, the week long event that is the run up to Super Bowl 50, the championship of the National Football League. The video below is from the Pepsi F!zz World Maker Faire event and the Super Bowl 50 event.

F!ZZ MegaMix from Videos on Vimeo.

BBLz is a brand which was trademarked by PepsiCo on May 30, 2017, to use as the brand name for the Pepsi Fizz product in amusement parks.

BBLz is the first permanent installation of the Pepsi Fizz product. On July 17, 2017, PepsiCo issued a press release about BBLz in Hersheypark.

A second Pepsi F!zz location was constructed in Shanghai Disneyland, in China, in 2017. This location opened sometime after July 4 and is smaller than Hersheypark’s; it has a simpler menu with only 4 drink options.

One drink is themed after one of the Tron rides in Shanghai Disneyland (Tron Lightcycle Power Run). That said, the options are somewhat similar to some of what is offered at Hersheypark’s BBLz, although they use 7UP instead of Mist Twst.