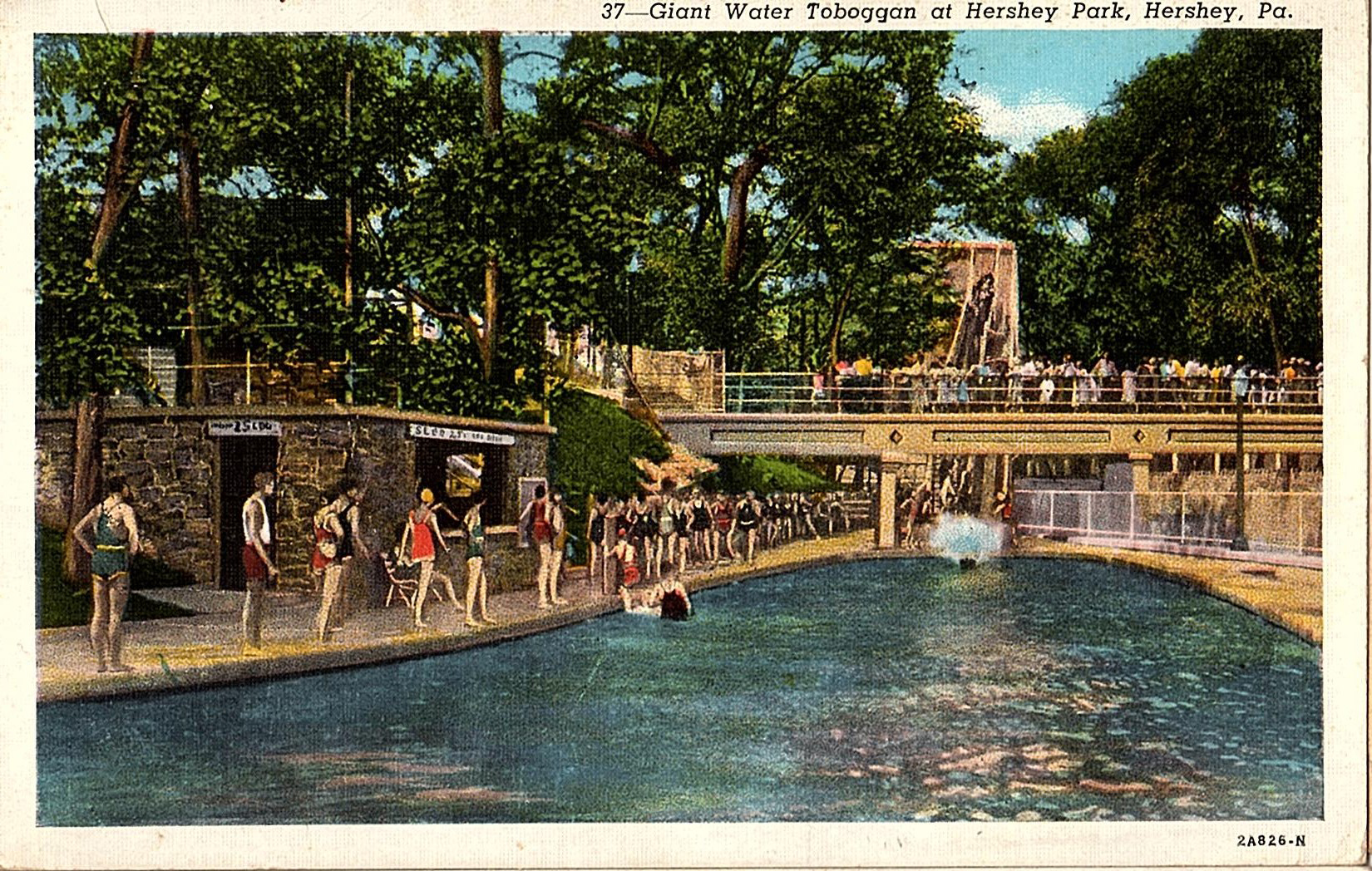 In The Boardwalk at Hersheypark, the park has a slide complex called Coastline Plunge, and smaller slides as part of the East Coast Waterworks complex. Hersheypark also had another slide complex, initially called Frontier Chute-Out, later named Western Chute-Out.

However, back when Hersheypark had its first pool – located in the Hollow right where the midway in between Comet and Great Bear, and Wave Swinger are at today – that pool also had its own slide – two versions, in fact. Let’s take a look at the Shoot the Chutes at Hersheypark.

Hersheypark installed its first pool in 1908, which was constructed during the 1907 season. The pool was not very large, and it was replaced by a larger pool in 1910. When construction of this new pool was publicized in the Hershey Press (the town’s newspaper), it was noted that there was the intention to install a toboggan slide at the pool. However, nothing is mentioned about the pool having a slide after that point, so more than likely, it was never constructed.

The pool did have a small slide to use, but it was a playground slide attached to the pool. It was next to the small bathhouse, which you can see below. That small bathhouse is approximately located where Comet’s station is today.

Meanwhile, the pool was renovated and enlarged again in 1912. Two years later, a Shoot the Chute slide was announced to be added to the pool – this was mentioned Hershey’s Weekly (Hershey Press was renamed). The slide was designed by James K. Putt and built by the Hershey Improvement Company, which Putt managed.

Shoot The Chute (1914) slide was roughly 30 feet tall and had a steep drop down, with a short runout into the pool. People would slide down on mats, and were able to skip off the pool water after one or two hops. The slide itself was a dark color, probably brown.

In 1924, this slide was retired and replaced by a new slide which was taller, longer, and featured a hump. Shoot The Chute (1924) was built by the Hershey Improvement Company and was designed by James K. Putt. This slide was painted a light color, possibly a cream white or just white.

The slide was torn down when the pool was closed after the 1928 season. The pool was filled in, with the location of the slide being replaced with a Philadelphia Toboggan Company Mill Chute – which would be in the park until 1972.

When the “old pool” opened in 1929, it did not have a toboggan slide. This was somewhat disappointing to a lot of the people who loved the old Shoot the Chute at the original Hollow pool.

In 1931, by popular demand, Hershey Estates brought back a Shoot the Chute in the form of a Giant Toboggan Slide. This was built in an area away from the main pool, along Spring Creek. The park generally didn’t like having a toboggan slide due to the liability associated with it, which is why they didn’t install a new slide in 1929.

The Giant Toboggan Slide was fairly popular and was even featured on a Curt Teich postcard.

However, when World War II began, and available employment decreased due to men going to fight in the war, Hersheypark immediately closed the Giant Toboggan Slide and its pool. The slide stood for several years before it was removed. The pool itself was turned into a secondary kiddie pool.

It’s unclear how long the small pool remained, but it was removed sometime before Hershey Park Pool was closed after the 1971 season.

To give some perspective on where everything was located in the Hollow, here is a comparison of three images of the park. Two are from the postcards above, and the third is a picture of Hersheypark from 1974.

2 comments on “Shoot the Chutes at Hersheypark”