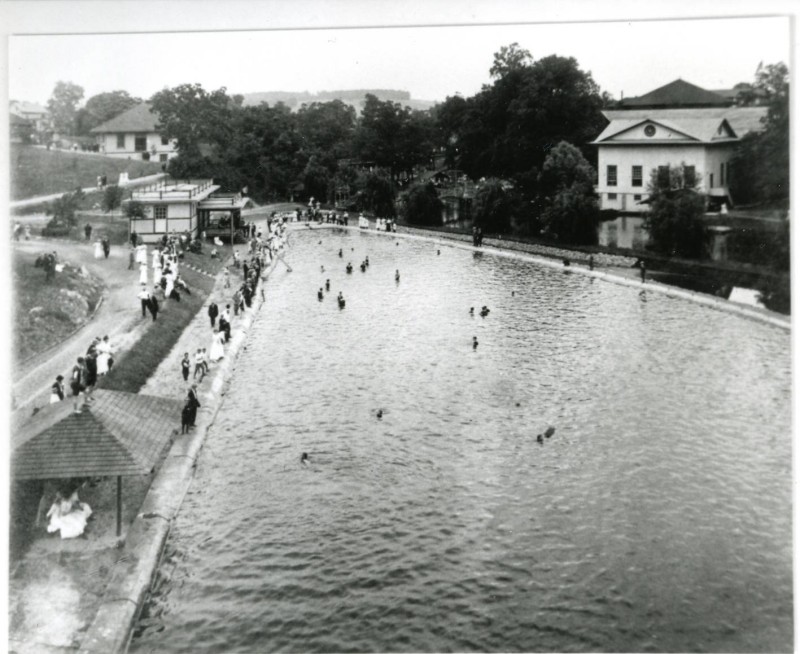 Before the pool at the intersection of Park Boulevard and West Derry Road was opened in 1929, there was another major pool in Hersheypark – the original Hershey Park Pool, which operated from 1908 to 1928 in what we know today as The Hollow.

In August 1907, Harry Herr and his subordinates began surveying an area of Hersheypark along Spring Creek below the year old Hershey Park Ballfield, on the north and east side of Spring Creek, opposite where the park’s first amphitheater was located (the site of the current Hersheypark Amphitheater). The area they were surveying is known as The Hollow today, and was best known as Comet Hollow.

The survey work was for a pool that was to be installed. The survey work occurred on two days in August, once early in the month, and again later in the month. What resulted was a small, earthen pool – it used no concrete. Wooden pipes connected Spring Creek to this pool, so it could be filled with water. The piping had filters to clean the water as it passed into the pool.

The first Hershey Park Pool opened in June 1908. It was popular with park visitors, but its ammenities were very limited – a bathhouse hadn’t even been constructed for the pool. A month later, on July 23, the first flood in the history of the park hit Hershey. One of the losses for the park was the pool – it’s wall separating the pool from the creek was destroyed.

The pool would remain closed through 1909, with further surveying being done in 1909 for a new, larger, concrete pool.

This new pool opened in 1910, to much fanfare. The pool was enlarged due to its popularity; a bathhouse was constructed that looked something like a trailer; and a toboggan slide was rumored to be installed.

The pool remained a popular feature of the park throughout the 1920s. The pool became so busy that it was no longer capable of being used for the number of people attending. This forced the park to build a much larger pool, at the intersection of Park Boulevard and West Derry Road, where the Carrousel was located at, next to the Hershey Park Ballroom.