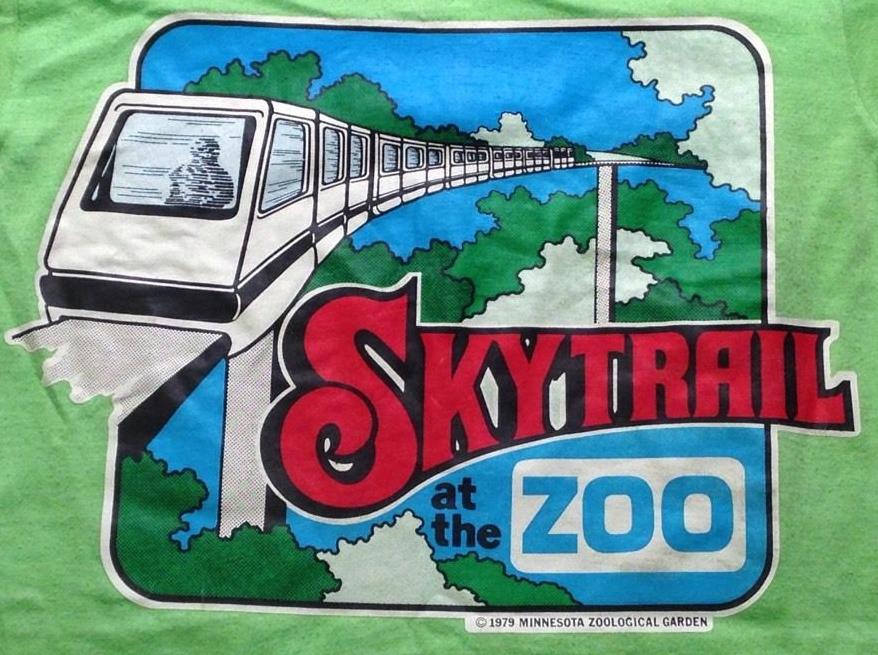 In 1969, a new state-funded zoo was being developed for the metropolitan Minneapolis / St. Paul, Minnesota area. The Minnesota Legislature created the Minnesota State Zoo Board (MSZB) to study the possibility of building such a facility. The study took several years, and planning and land acquisition took several more years after that.

Minnesota Zoological Gardens, was built in Apple Valley, to the south of Minneapolis / St. Paul, would open in 1978. Back in 1971, MSZB proposed to the legislature the inclusion of a monorail system into their funding plan. The idea was that it would give people a place to view from an aerial perspective and make it easier for those wouldn’t be so easily able to walk through a large area.

This was rejected by the legislature in 1971. Two years later, MSZB put forth their final proposal for the zoo, which did not include a monorail system. The legislature approved this plan, and the state authorized funding of the Minnesota Zoological Gardens project. A year later, in 1974, the legislature allowed the MSZB to grand concessions in the zoo.

MSZB then went to the state legislature and made a strong proposal to include a monorail system.  However, the Minnesota Legislature showed no interest in financing such a system. The legislature did authorize the zoo to build a system controlled by a third party, instead.

This third party became a nonprofit corporation specifically founded for this purpose – Minnesota Zoo Ride, Inc. (MZR),  controlled by MSZB. Minnesota Zoo Ride was established in August 1976. A year later, MZR reached an agreement with UMI to construct a monorail system at Minnesota Zoological Gardens. MZR agreed to purchase the system from UMI for $5.6 million. MZSB then agreed to an installment purchase agreement at a cost of over $13.9 million, which included $8.4 million principal. $8.4 million was the true cost of the monorail system.

MZR assigned the rights from the installment purchase agreement to Smith, Barney, Harris, Upham and Company (Smith Barney). Smith Barney then sold certificates of participation to investors (banks or insurance companies) to finance the monorail system.

The ride was scheduled to open in 1978. UMI was given incentives by the zoo to get the ride opened quickly. They were to earn a $100,000 bonus if a two-car train was in operation by December 1, 1978, with an additional $45,000 bonus if that two-car train was in operation by September 1. However, UMI found that their design for their track would make winter operation of the Tourister system much more expensive, so UMI redesigned the track to protect the power rail.

UMI also had difficulty working with the metal used for the track. The metal being used was a maintenance-free metal called Corten. The problem was that the metal could only be welded in temperatures above 50 degrees. This meant no work could be done constructing the track in the winter. Delays ended up being quite substantial, with only a small part of the monorail system opening in 1978.

It appears that the system was partially opened in 1978, to participate in a study that UMI volunteered to join. This was a US Department of Transportation winterization test – to understand how well certain monorail systems could operate in winter conditions. UMI was one of three companies to participate.

Minnesota Zoological Gardens faced immediate financial difficulties when the zoo opened in 1978. Attendance was much lower than expected and the delays with the monorail system certainly wasn’t generating any money. In March 1979, the zoo went to the legislature seeking an additional $1 million to avoid defaulting on the monorail. The governor of Minnesota, Al Quie included the request in his budget for 1979-81. The issue was not resolved at the time. However, zoo officials were promising that the monorail would be open by the summer of 1979.

The monorail, originally called Northern Trek Monorail but also called Skytrail, fully opened on Thursday, September 20, 1979, just a few days before the end of summer. It was a quiet grand opening, without a ribbon-cutting ceremony. 696 people rode Skytrail that day. From then until January 31, 1980, 91,976 passengers rode the monorail. Fares collected amounted to about $68,000.

Debate centered around whether the state had any obligation to help the zoo. The legislature rejected assisting the zoo, including language in the budget saying that the monorail was never intended to be a public obligation and wasn’t then either. The zoo defaulted on a $200,000 payment on April 1, 1980.

At the same time, the zoo was having difficulty making money off the monorail. With zoo attendance already being lower than expected, the monorail itself was not particularly popular. It was considered boring by many who rode it. On May 24, 1980, a reporter for the Star Tribune in Minneapolis discovered that UMI did not have complete accident insurance on the ride. This reporting was triggered after one train did not act properly.

There was a backup on the monorail system, and one train pulled closely behind the train ahead of it, coming to a stop. For whatever reason, when the train stopped, the doors opened automatically, the autopilot thinking the train was in the station.

UMI believed that the state would pay most claims in the event of an accident. Company president Hank Pater said it wasn’t “in the cards” for the UMI Tourister system to have an accident. Pater said the incident that occurred was likely the result of incorrect maintenance of the monorail by the zoo.

However, on May 31, 1980, an electrical malfunction caused the monorail to stall and the engine spark and produce a lot of smoke.  The incident stranded guests for a half-hour, and it looked bad for the zoo and UMI. The monorail would be closed for about two weeks, and UMI acquired complete accident insurance a few days after this incident.

On the one hand, the monorail’s financial situation was very precarious, and on the other hand, the monorail was not only unpopular, but the safety of the ride was in question. The situation remained in limbo for the next several years, as lawsuits from the owners of the monorail certificates against the zoo were put in court.

The situation remained in limbo through mid-1985 when the Minnesota Legislature gave $750,000 to the Minnesota Zoo to purchase the monorail system outright from the investors. However, this was seen by the investors as an unfair offer. This pushed the zoo to search for more money to buy the system.

In August 1985, the investors informed the zoo they would be closing down the monorail on October 1. The reason for closing then was because of decline in ridership in the fall and winter months. It was also intended to remain closed indefinitely, until a purchaser could be found.

The Minnesota Zoo gained several new and influential board members of the local community who were able to provide better funding for the zoo and the monorail. They acquired a loan, doubling the money the Legislature gave to the zoo, from the Charles K. Blandin Foundation of Grand Rapids, Michigan. The loan was due to be paid back in full in 1986 (which it was).

The Minnesota Zoo was able to purchase the monorail system from the investors for $1.5 million dollars, closing the deal at the end of December 1985. The last investors eventually settled their lawsuit in June 1986. The zoo reopened Skytrail with a grand reopening ceremony on Mother’s Day, May 11, 1986.

From that time onward, the Minnesota Zoo was able to push beyond its past financial problems and grow with new and exciting exhibits. Attendance increased though Skytrail never saw the kind of ridership the zoo founders envisioned.

The monorail was closed in 2013 after 34 years of service. Officials from the zoo commented that to renovate and update the ride would cost around 40 million dollars, which simply wasn’t feasible.

After the monorail was removed from the zoo, one train was sold to Gabe Emerson who has a blog called Saveitforparts. He has a lot of information about the monorail there as well, and he’s been writing about what he has been doing to remodel the train since purchasing it in 2015. He also has a few videos of the train. He also provided some background information on this article – so many thanks for the help!

That’s it for this monorail system. The next article will be about the last two systems UMI manufactured – in Florida and Louisiana. Thanks for reading!