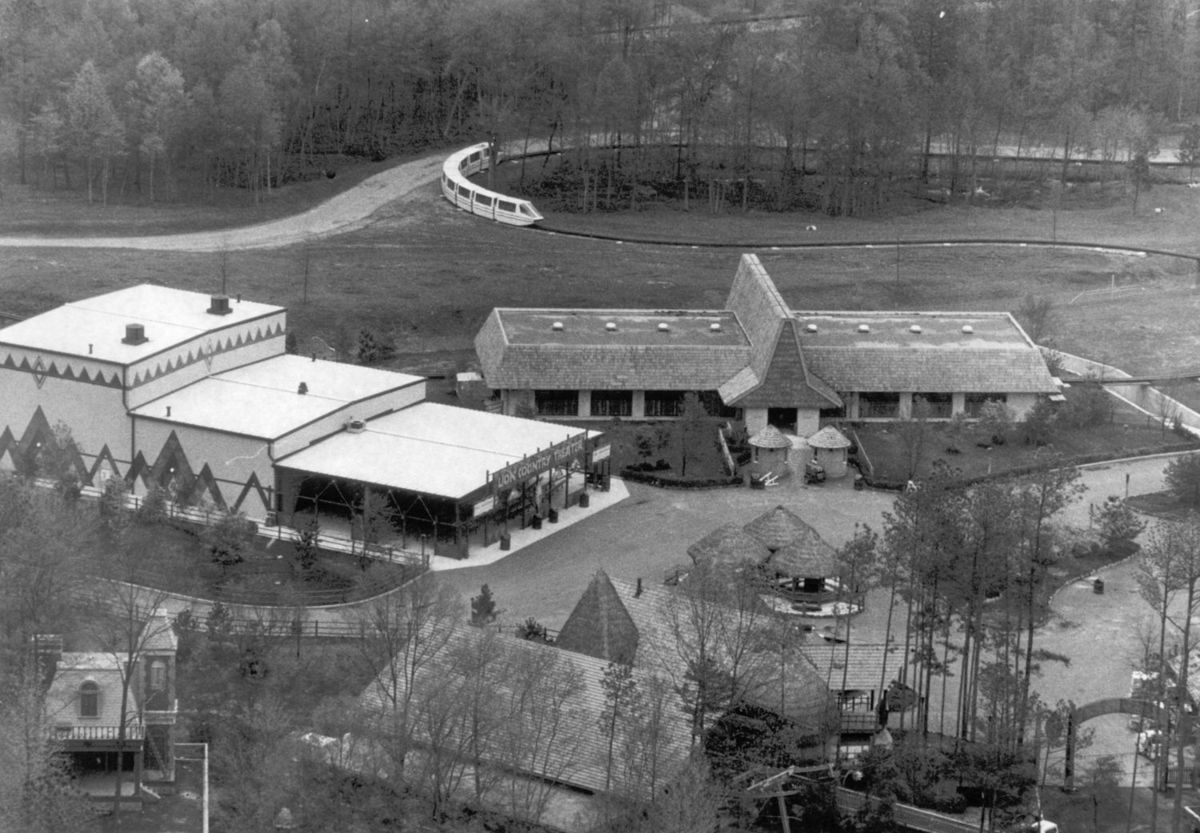 In 1973, Universal Mobility, Inc. (UMI) debuted their UNIMOBIL Tourister Type II monorail system. Six systems would be built over the following eleven years, three which were opened in successive years – 1973, 1974 and 1975. These are the systems that operated at Carowinds, Kings Island, and Kings Dominion.

Carowinds opened on March 31, 1973, and just a couple of months later, on June 2, they opened their monorail system. The inaugural ride included the governors of North and South Carolina. The monorail was intended to connect the park with a hotel that was to be constructed adjacent to the theme park. The hotel was never built, however.

This monorail system was built at a cost of $3.0 million ($16.2 million in 2016 US dollars) and was two miles long. This was the longest system UMI constructed at the time, though this would be equaled by the other two systems featured in this article. Carowinds Monorail featured four 8-car trains for a capacity of 2,200 passengers per hour.

The ride peaked in popularity in the early 1980s, with ridership declining throughout the remainder of the decade and into the 1990s. This led Carowinds to remove the ride following the 1994 season. Carowinds did not scrap the ride – it was sold to Preferred Vacations, a resort company based in Acapulco, Mexico. The system was never put back into operation. It is unclear whether the monorail was scrapped or remains in storage there.

In late 1973, Kings Island announced they were adding a safari-type zoo to the park. This zoo was managed by a third party, Lion Country Safari Inc., who named the zoo Lion Country Safari. This safari included a UMI Tourister monorail system that sat lower to the ground as so to give a unique view of the safari, instead of being above it. The concept was to make people feel like they were really in the safari. The monorail was called Lion Country Safari Monorail.

The monorail system was constructed at a cost of $3.5 million ($17.0 million in 2016 US dollars), and was UMI’s second 2-mile long system. Lion Country Safari Monorail featured seven 9-car trains for a capacity of 2,100 passengers per hour. Since the ride went through a safari, it went at a slower speed than other systems UMI manufactured. There was also an additional fee to ride the monorail through the safari.

In 1977, Kings Island ended their relationship with Lion Country Safari Inc., and rethemed the area as Wild Animal Safari. As such, the monorail’s name was changed to Safari Monorail. Then, a few years later, the area was renamed Wild Animal Habitat, at which point the monorail was called Wild Animal Habitat Monorail. Following the 1993 season, Kings Island completely removed the animal habitats and the Safari Monorail from the park, with the area being rethemed Adventure Village.

The Safari Monorail remained in storage until 1999 when Jungle Jim’s International Market bought the system. Jungle Jim’s operates the monorail for a short time during the year to this day.

This system was built by UMI at cost not publicized; the cost was likely similar to Kings Island’s. The system was two miles long and the trains featured nine cars per train. The ride time was about 20 minutes.

The area was removed because of apparent lack of interest. It was also said that Paramount, which bought Kings Dominion (and Kings Island) in 1992, believed the safari area did not fit in with the new theme to the park.

This was a look at the first three Tourister systems UMI built at parks which are now all owned by Cedar Fair. Up next is a Tourister system which was built at the Minnesota Zoo. This system has quite the story, so be sure to check back soon! Special thanks to Carowinds The Early Years for allowing me to use a few pictures for this article.