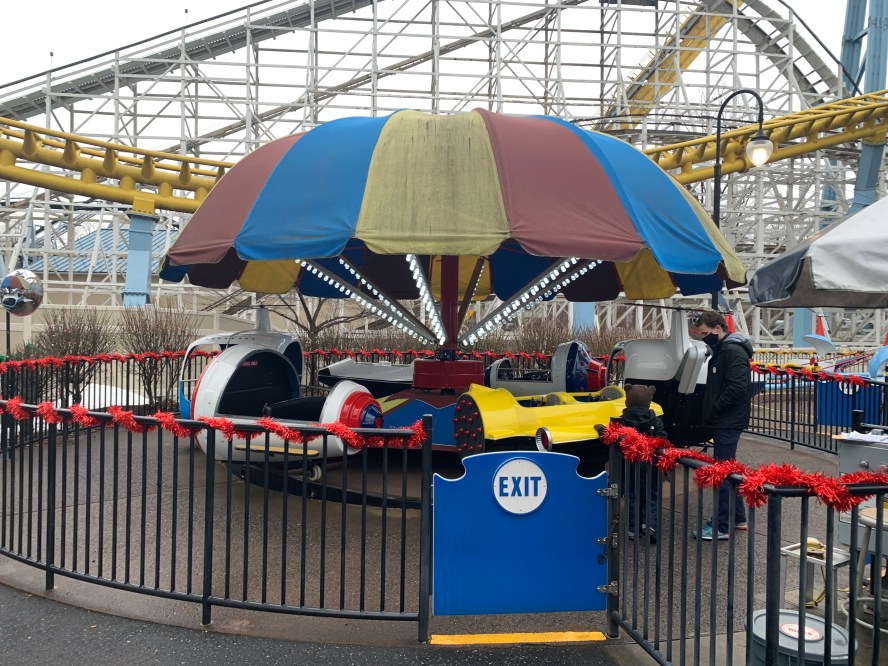 Space Age is an umbrella kiddie ride, installed in Hersheypark in 1965 and is still operating today in the Founder’s Way region of Hersheypark.

The ride has maintained the same theme throughout its 56 year history at Hersheypark. The ride is registered with the Commonwealth of Pennsylvania Department of Agriculture Amusement Ride Safety Division as PA Ride ID Number 103 under the name Space Age.

This is an umbrella ride sold by Hampton Amusement Company. The “Space-Age Ride” debuted sometime between 1961 and 1965, when Hersheypark purchased the ride.

Space Age was installed in the north Kiddieland section of Hersheypark, debuting on April 29, 1965.

Kiddieland was one of the first themed sections in Hersheypark, established in 1949. It was located in the area surrounding the Comet roller coaster and Pretzel dark ride (where Fender Bender is today). Kiddie rides are still in this part of the park today.

Hampton Rides had sold Hersheypark several kiddie rides by the mid-1960s, so it was only natural that the park purchased another one for the 1965 season. Within the past few seasons, Hampton began selling a new umbrella kiddie ride called “Space-Age Ride.”

Hersheypark purchased one of these rides, and it received top billing in Hersheypark’s press release announcing the start of the 1965 season.

In 1972, Hersheypark relocated Space Age to a new section of Hersheypark known as Carrousel Circle. Hersheypark made this decision as part of the 1970s renovation project designed by R. Duell and Associates. The park determined that a few of the kiddie rides, including Space Age, would be best placed near the front of the park due to their popularity.

Space Age is still in this area of the park, as of the 2020 season.

0 comments on “Space Age at Hersheypark”