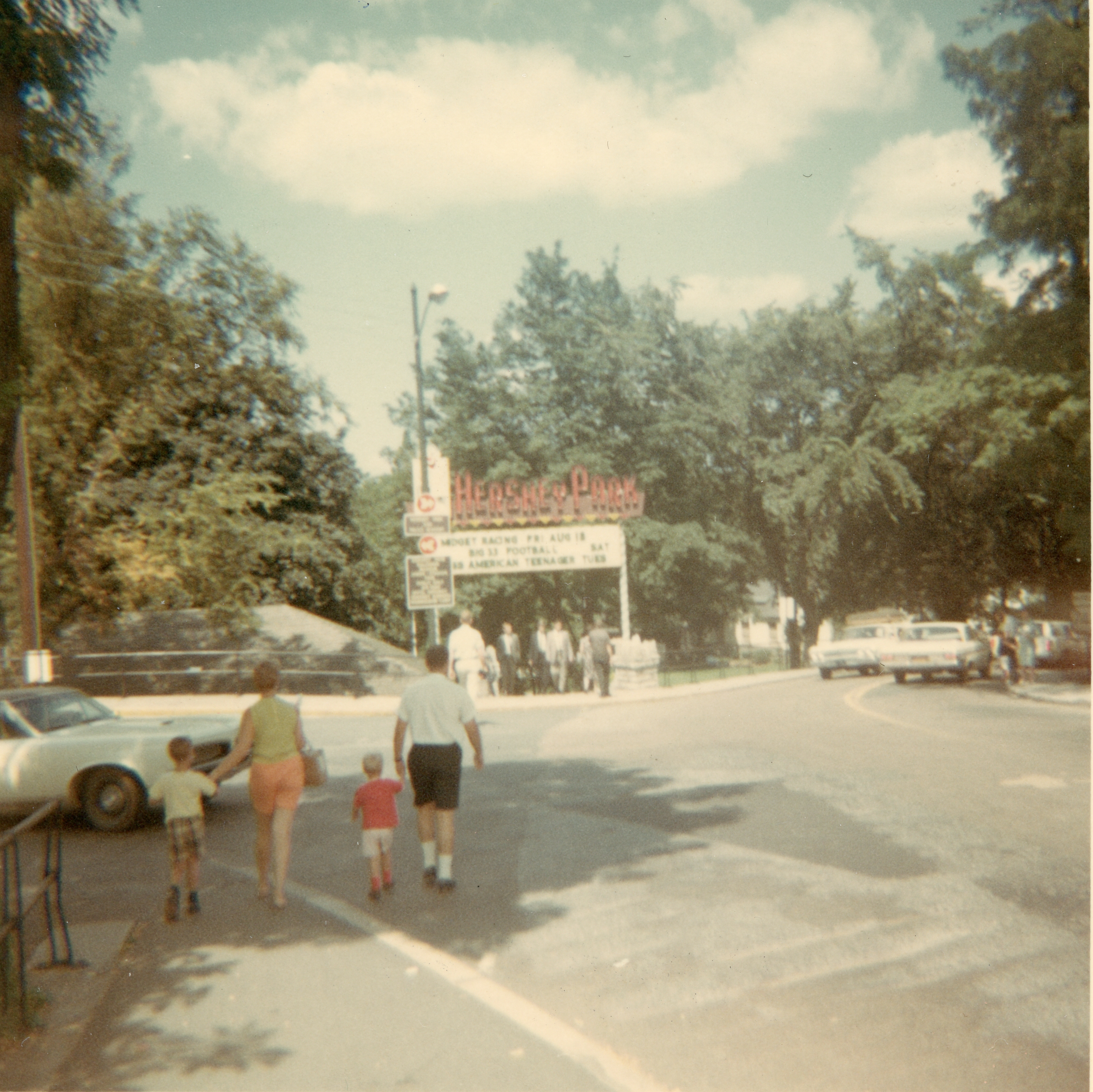 The featured photo above is courtesy the Hershey-Derry Township Historical Society. If you are interested in looking at more photos in their collection, check out the Historical Society’s Online Collections Database after reading this article!

On April 21, it was the 50th anniversary of the opening of Hersheypark for its 1968 season. This was Hersheypark’s 62nd year of operation since opening on May 30, 1906. This was a significant year for the park, as it was the final attempt at cleaning up the image of the park through improvements before going with the R. Duell renovation plan in the 1970s. Here are some of the changes, events and other things that occurred in 1968.

Hersheypark installed two new rides in 1968. The adult ride was a Frank Hrubetz & Company ride called Round Up. This was located adjacent to the Aero-Jet ride (today called Starship America) across from the Gold Nugget (or Golden Nugget) dark ride. The area where this is at in the park today Is approximately where Dizzy Drums is at, across from Fender Bender.

In 1976, Round Up was moved from its original location to a spot directly next to the Nugget (which had become a shooting gallery in 1973). Following the 1977 season, the Fender Bender building was constructed. To make way for the new structure, Round Up was removed and replaced with a new ride, Trabant (later renamed Rodeo).

The other ride was manufactured by Hampton Rides and was initially advertised as Kiddie Variety Ride. The variety ride replaced the Kiddie Turnpike, which was removed after the 1967 season. Once installed, the ride was called Motorcycles though there were several other types of vehicles on the ride. It was placed adjacent Kiddie Whipperoo and Space Age.  In 1972, Space Age and Motorcycles (along with another kiddie ride in that area, Helicopters) were relocated to the new Carrousel Circle, where they remain today. Motorcycles was renamed Traffic Jam in the 1980s.

Just before the start of the 1968 season, the park’s first general manager passed away. Milton S. Hershey biographer Joseph R. Snavely died at the age of 86. He was born on September 8, 1881, and he died on April 15, 1968. He served as the park’s general manager from 1907, the park’s second season, to 1911, when he changed jobs and Abraham T. Heilman was promoted to fill the general manager role.

Hershey Park Golf Course opened on April 6. Several changes had been made to a couple of holes, and some of the trees which had been on the course since it opened in 1931 were taken down. New trees were planted to replace most of the ones taken down.

In July 1968, to honor the Dutch Days event at the park, Pennsylvania Governor Raymond P. Shafer declared the days of Tuesday, August 20 to Sunday, August 25 Pennsylvania Dutch Days across the Commonwealth of Pennsylvania. The governor was scheduled to be at the opening day of the Dutch Days, which was opened with a ribbon cutting ceremony, but due to a change in schedule, he was unable to attend.

The event was held several parts of Hersheypark. At Hersheypark Stadium, the Pennsylvania State Police Rodeo was held on August 22 in conjunction with Dutch Days. Inside Hersheypark Arena was the working arts and crafts exhibition which charged one dollar for adults and was free for children 16 and under. Included in the exhibition were quilting parties, various other arts and crafts ranging from straw hat makers to cookie cutter shapers.

Outside the south entrance of the Arena, where Hershey Park Ballfield was (today the part of Founders Way that was Carrousel Circle), was an area called the Farmarama. There was a tent with various foods being sold and games to be played. There were also smiths making various metals and then people could walk into to the park and enjoy all of the rides. Daily seminars were held at the Hershey Park Band Shell while the Poultry Queen was chosen on Saturday night.

Over at the Ballroom, there was a Country Auction Sale by Betty Smith which was held on Friday. In the Hershey Theater building there were several different events. Art was on display in one room, while antiques dealers were in another room. There were also strolling and marching bands making their way in and around Hershey during the event.

The 32nd annual Baby Parade was held at the park on Labor Day Weekend. The park then closed for the season the following weekend, Sunday, September 8.

Three months later, in December, a major announcement was made by the Monorail Amusement Company, a business owned by both Hershey Entertainment & Resorts Company and The Hershey Company (then called Hershey Foods Corporation) – a monorail was to be constructed in Hershey and would open in 1969.