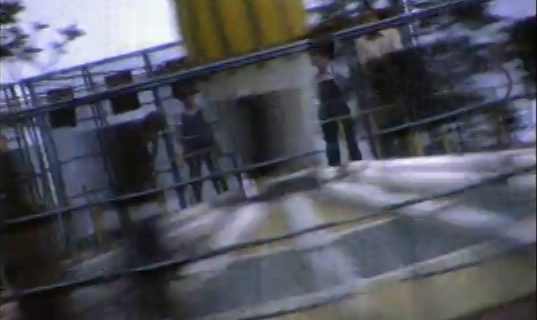 In 1966, 1967, and 1968, Hersheypark installed three rides sold by the same company, Frank Hrubetz & Company. Since I’ve already written about Tip Top, I will focus on the other two Hrubetz rides.

Frank Hrubetz & Company existed between 1939 and 1976 in Salem, Oregon. Founder Frank A. Hrubetz worked for Salem-based Eyerly Aircraft Company from 1930 to 1939.

In 1941, Hrubetz formed a partnership with Earl O. “Johnny” Bushnell creating Hrubetz & Bushnell Manufacturing Company. This company manufactured products aside from amusement rides throughout their history, especially during World War II when they had to make products for the war effort.

The Hrubetz companies ended when Frank Hrubetz retired and sold the business to his son-in-law who renamed it Kilinski Manufacturing Company. Kilinski was eventually renamed ManCo and then Datron Industries, Inc., in 1991. Battech Enterprises, LLC purchased the assets of Datron in 2009, who continues to services some Hrubetz rides to this day.

Hrubetz became one of the most popular ride manufacturers between the 1950s and 1970s. That popularity rode to Hersheypark with the addition of the aforementioned Hrubetz rides.

Paratrooper was installed in 1967 adjacent Tip Top. This was a ride in which you sat in a car that went around in a circle. It gave you the sensation of parachuting as a paratrooper would – hence the name. This Paratrooper had the serial number 833 and was shipped to Hersheypark on February 1, 1967.

Round Up was installed in 1968 adjacent Kiddieland and Aero-Jets, near where Fender Bender is today. This is the same area where Tip Top and Paratrooper were relocated. Round Up was a ride where you stood and held on to the grab bars as the ride spun you around. The Rotor (made by Chance Rides) is a similar type of ride, but indoors.

The Round Up Hersheypark purchased was notable for being the last non-folding Round Up constructed by Hrubetz & Bushnell. The serial number for the ride was #4414 – the 114th non-folding model manufactured.

Round Up remained in the same area of the park for the entire time it was there, except that the ride was moved from its original location to a spot next to Gold Nugget Shooting Gallery in 1975. Round Up was also removed following the 1977 season.

Many parks had these rides – showing the influence Hrubetz & Company had on the industry at the time. The three Hersheypark had turned out to be more popular than expected – even today, so many years later, some people wish Hersheypark still had these rides.

Many thanks to Mark Blumhagen for information relating to the Paratroooper and Round Up.

5 comments on “Hrubetz rides at Hersheypark”