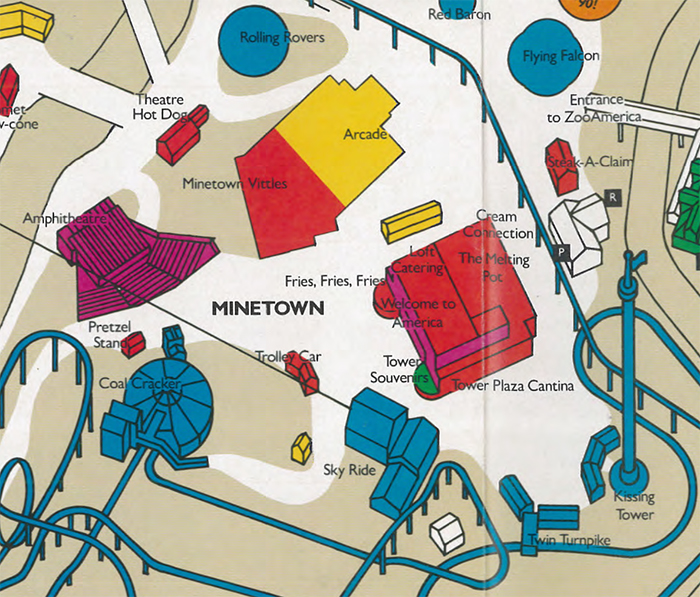 With the announcement of what’s going on for a new thrill on the Hill, here is an article about the history of Kissing Tower Hill – the first area of the park that was developed beginning in 1905.

When the town of Hershey was first planned, a park for the people of the town was included in these plans. It wasn’t until after the chocolate factory was initially considered finished that work could begin on other buildings in the town – which included buildings for Hersheypark.

This began in the summer of 1905, with a pavilion completed in the fall of 1905. The goal was to have it ready before winter set in, so it could be properly prepared for the 1906 season. This pavilion was later known as Hershey Park Restaurant, and later the Penny Arcade. (In 1990, this building was replaced by Overlook Restaurant and Overlook Arcade.)

This area of the park overlooked Spring Creek, which ran in the hollow from the chocolate factory, through a man-made lake called Spring Lake, to Swatara Creek.

Several other buildings were constructed including one which had several bowling lanes in the building’s basement. Once the bowling alley opened in 1909, the area quickly gained the nickname Bowling Alley Hill. This building was locatedapproximately where Flying Falcon is today.

The first ride installed in Hersheypark was a carousel that was located near Hershey Park Ballfield (currently the former Carrousel Circle area in Founders Way) – not located on Bowling Alley Hill. To get to where the ride was installed, the park purchased a Miniature Railroad. The main station was placed near the main entrance of the park, located at the corner of Park Boulevard and Park Avenue. This was the first ride installed on the hill.

A band shell was placed adjacent to the main pavilion, the most well known version opened in 1914. The band shell would remain in Hersheypark until the end of the 1972 season.

It wasn’t until 1923 that the next ride was installed on the hill – and it was the park’s first roller coaster known as The Wild Cat. Originally named The Joy Ride, Wild Cat was manufactured by Philadelphia Toboggan Company and designed by Herbert P. Schmeck. This roller coaster crossed Spring Creek twice and was an out-and-back coaster. The Wild Cat operated until the end of the 1945 season.

In the 1920s, the bowling alley on the hill was removed. Over time, while many people referred to the area as Bowing Alley Hill, others simply called it “the hill.” As the park was evolving, the amusement center eventually focused on the hollow, with most rides being installed there in the 1930s.

When Comet was added to Hersheypark to replace Wild Cat, a funhouse – Whoops – had to be removed. Hersheypark decided to build a new funhouse on the hill, where the bowling alley once had been. This funhouse was called Funland. The arcade in the old dance pavilion was named Sportland.

The next change for this area wouldn’t happen until 1964, when a Flying Coaster was installed. This ride was in Hersheypark for only 8 seasons, removed after 1972, the same year Funland was removed.

Initially, only Tower Plaza was constructed, although elements of Minetown were built. This includes the installations of Coal Cracker (1973), the Minetown station of Sky Ride (1974), Kissing Tower (1975), and Twin Turnpike (1975).

In 1990, Hersheypark merged the semi-existing Minetown theme with Tower Plaza and the non-themed contemporary area of the hill to form the new Minetown region. Several new rides were installed, three of which were kiddie rides: Convoy, Dinosaurs-Go-Round, and Red Baron. An Arrow Dynamics ride (under the HUSS Maschinenfabrik name) Condor was installed in the area approximately where Himalaya had been – this was called Flying Falcon.

The area also had a new, large arcade and restaurant building which replaced the old Penny Arcade building.

In 1998, Hersheypark installed the first steel, inverted, looping roller coaster in Pennsylvania. Great Bear’s station was located in Minetown, though most of the course of the ride was in the hollow.

In 2016, Hersheypark began teasing that a new thrill would be coming to the Hill. The new ride was slated to be announced on August 2, 2016, which it was: Hershey Triple Towers.

At the same time, it was announced that Flying Falcon was to be put in storage and the Convoy and Frog Hopper rides would be moved to where Flying Falcon had been. Flying Falcon may be reinstalled at some point in the future.

Consider supporting The Amusement Parkives! Click here to help out!

2 comments on “The History of the Thrills on The Hill”