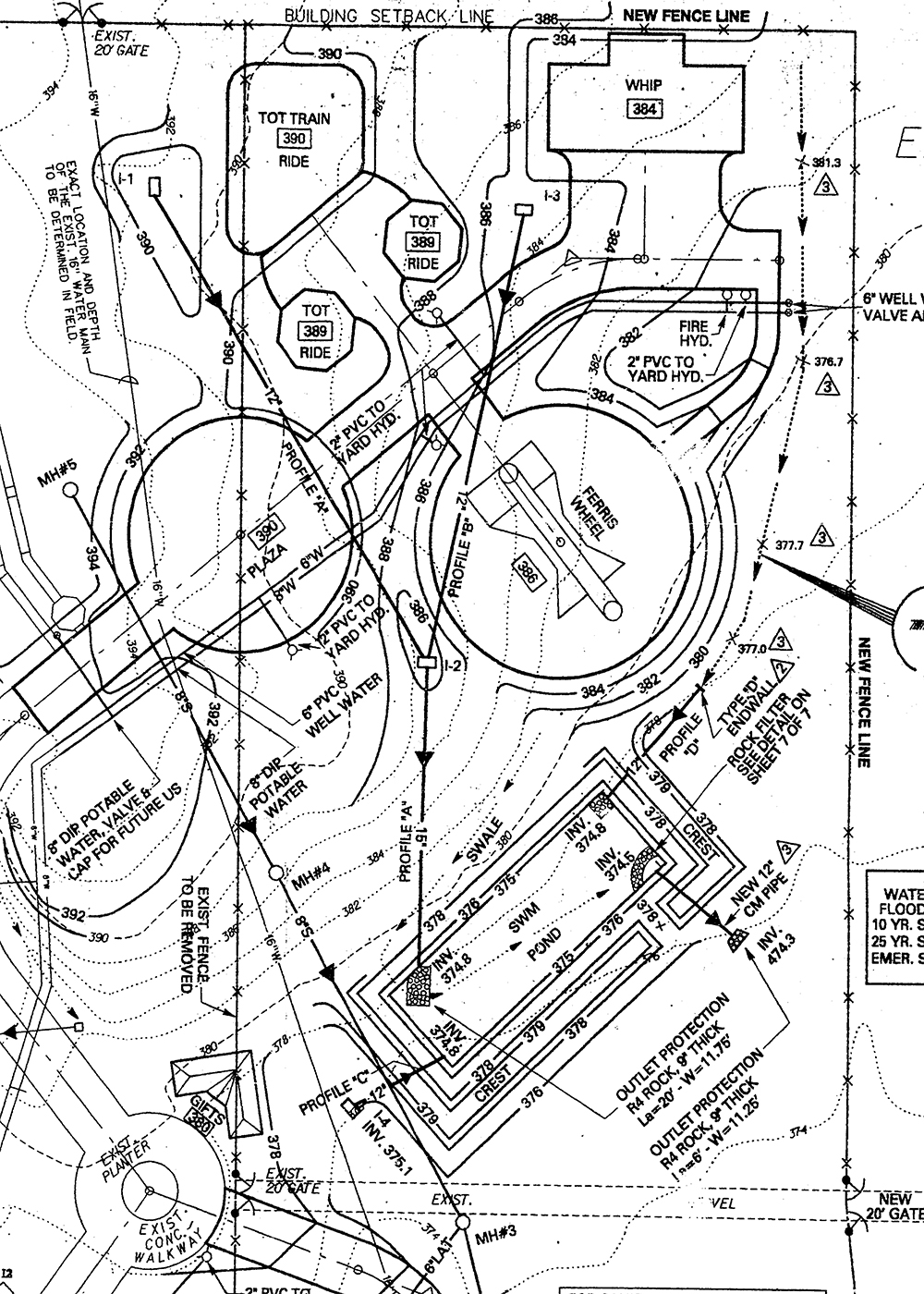 Today’s article is about the Midway America expansion Hersheypark underwent over seven years (1996-2002). This article provides plans which are on file for the public at the Dauphin County Recorder of Deeds Office. This is an overview of the expansion; there will be future articles about the rides in this area that will provide more detail about them.

When Hersheypark began expanding north of old Derry Road, in 1980, the first plans only looked at the immediate area north of Dry Gulch Railroad, adjacent Hersheypark Arena. This was right where old West Derry Road had been, as well as old Strawberry Alley.

However, the park had already started growing towards that area when, in 1976, the park added a maintenance building (which is still there today). At the time the park wanted to add the building, the land was owned by the Hershey Trust Company rather than HERCO (today called Hershey Entertainment & Resorts Company).

This land was located between Hersheypark Stadium, Hersheypark Drive (then called Airport Road), Park Avenue, and Strawberry Alley. This land was divided into two tracts, the maintenance building being developed on tract 1. The property was then transferred to HERCO and consolidated into two tracts – one tract is what included the maintenance building and the area behind it (today a parking lot) and the other tract is what eventually becomes Pioneer Frontier, Midway America, and The Boardwalk.

When Hersheypark planned out their expansion for the 1980 season, none of these lands were included. By the time plans for Canyon River Rapids were being drawn up in 1986, however, the entire area north of the new Pioneer Frontier area was included on the plot for the park.

In 1989, Hersheypark began planning for an expansion beyond the northern end of Pioneer Frontier. The concept included four new roller coasters, a variety of flat rides, and a new amphitheater. (The amphitheater would never be built.)

These plans were drawn up for long term development – indicating construction wouldn’t begin until 1994 at the earliest.

That first coaster, installed in 1923 and removed after the 1945 season, was The Wild Cat. This GCI Wildcat was named for the original. A slogan was used, “The Cat is back!”

Phase 2: Midway America now has more than one ride!

In 1997, Hersheypark added Phase 2 of Midway America. This included a Ferris Wheel, Whip, and the relocation of several kiddie rides. Plans originally called for another circular plaza to be installed, but this was never done and that path was simply straightened.

Phase 2 called for the re-installation of Miniature Train, making it the first time the ride had been permanently installed in the park since 1971, where it had been placed near Comet and Hershey Park Ball Field.

In 1999, Hersheypark introduced Phase 3, the Hersheypark Fair. The biggest change with this plan was the location of Frog Hopper, which was originally planned to be placed on the opposite side of where it actually was installed. A new roller coaster was installed in this area, Wild Mouse. Manufactured by MACK Rides GmbH, this was a standard park model mouse.

This expansion included the addition of a Chance Rides Chaos – Chaos would only be operated from the 1999 season to the 2005 season when it was removed to make way for The Boardwalk at Hersheypark, which opened in 2007. Most of the food trailers installed for the Hersheypark Fair were removed after the 2014 season.

The addition of Music Express served as a recall to another ride Hersheypark once had, Himalaya.

Lightning Racer is a racing-dueling coaster with two tracks. One side is called Lightning, and the other side is called Thunder. The mid-course tunnel originally included a water element which was turned off after a year or two.

In late 2001, Hersheypark began teasing a new ride. Called Attraction 2002, the ride was a water coaster. A public contest was held, and the ride was named Roller Soaker. Roller Soaker was manufactured by Setpoint Inc., of Ogden, Utah.

The ride was known for it’s technical difficulties – although it was popular due to the water elements on the ride. The ride remained in the park through the 2012 season, when it was removed.

One area of Midway America remained undeveloped for several years. This space was first used for a sitting area for the NightLights Laser Show that was installed in the park in 2001. The show was discontinued in 2004 after the screen was significantly damaged in a storm. That field would later be developed into The Boardwalk.