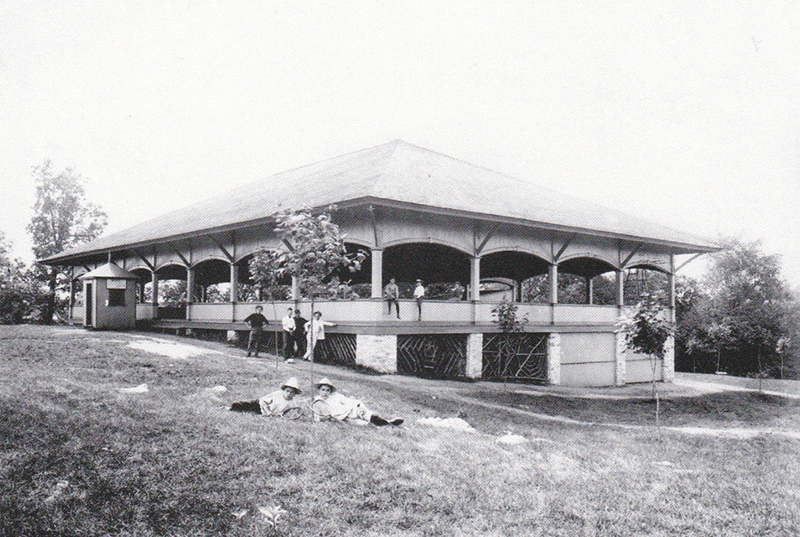 James K. Putt – who went by the name Jim – was a chief builder for Milton S. Hershey for the first 25 years of the town of Hershey’s existence. He was born on May 26, 1856, and died on May 11, 1938. Putt lived in Hershey from 1904 until his death. He was married and had six children. Putt most notably supervised construction for most of the structures in Hersheypark, over the park’s first twenty years, and various homes and buildings around the new town.

This is a look into the master builder for Hershey, Jim Putt.

NOTE: Some of the information in this article is sourced from the book, The Hershey Story, written by J.R. Snavely and published in 1950. The book is written from the first person perspective of the author, J.R. Snavely, about Milton S. Hershey and the town of Hershey.  In some cases I will be quoting conversations between two people which was anecdotally told to Snavely.

Putt came to Hershey in 1904, just as the chocolate factory was nearing initial completion. Putt was suggested to go to Hershey through Milton S. Hershey’s aunt, Sarah, who was aware that Mr. Hershey needed men for construction. Putt traveled from Reading, where he and his family were living, to Hershey, and met with Mr. Hershey and Harry “Lebby (or Lebbie)” Lebkicher; Mr. Hershey hired Putt and put him to work on construction of the factory.

Within the following year or two, Putt proved himself to be a very able carpenter, and was promoted to head carpenter, which was essentially the highest managing position in Hershey Improvement Company at the time. Putt’s direct supervisor was Lebkicher, and as described in J.R. Snavely’s The Hershey Story:

Old Lebby is my boss, but Mr. Hershey lays out the work.

Putt respected Lebkicher, but much like many in Hershey, aside from Mr. Hershey, he didn’t exactly get along with Lebkicher.

Putt also claimed to not use blueprints, generally. In The Hershey Story, when Putt was asked if he did not use blueprints when he built the park pavilion, Putt said, “Sure! That was as easy as rolling off a log.” Putt also said, laughing at his own witticism:

What’s the use of blueprints?
Noah never used any, and he built the ark.

Putt also spoke of the plans Mr. Hershey had for the town shortly after Putt came to Hershey in 1904. He said Mr. Hershey told him that he planned “to build a store on that corner across the road” (what today is the Hershey Press Building), “a bank” (today, 1 Chocolate Avenue – Hershey Trust Building), and “a hotel on Patt’s Hill” (today, The Hotel Hershey).

Putt’s response was that the chocolate factory would have to be selling a lot more chocolate than it was then. Mr. Hershey replied, “That’s only a beginning, but you’ve got to have faith.” Putt replied, “Bless my soul, you must have a lot of it.” Mr. Hershey said: “I have Jim [referring to Putt in the third person].”

After relating that story to J.R. Snavely in The Hershey Story, Putt said, “I’m mighty glad to be working for a man like Mr. Hershey.”

Of the buildings Putt designed in Hersheypark, this included:

….and so much more. For all intents and purposes, Jim Putt built Hersheypark.

Putt designed the original Hershey Press Building, which was located inside Hersheypark. It was a small building, not intended to be the only print building to be constructed (Mr. Hershey intended to build a much larger facility when finances were available). Unfortunately, this building burned down.

Putt also designed the Round Barn, which was on the base of Patt’s Hill along Hersheypark Drive (at the time, that area was known as Broad Acres – what is today’s Hersheypark Drive didn’t connect between old Hotel Road / Park Boulevard and Hockersville Road / Hanover Street allowing the area to have a broader name than what it would seem today). The Round Barn was featured in a September 1920 issue of National Builder.

Unfortunately, the Round Barn caught fire and burned to the ground in 1943 and was not rebuilt.

Putt was married to Amanda G. Shirk, who was born in 1860 and died in 1927. They had a number of children – two daughters and four sons. Their daughters ended up living in Lebanon, Pennsylvania, while their sons ended up in Harrisburg, Philadelphia, Marmouth, North Dakota, and one stayed in Hershey. They had eleven grandchildren at the time of Putt’s death.

Putt also had several siblings, a brother and a sister.

Putt died on May 11, 1938, at Hershey Hospital, just shy of his 82nd birthday. He was buried at Kimerlings Cemetery in Lebanon, Pennsylvania.

Each Jim Putt quote in this article is from from Chapter XII in The Hershey Story, titled “I Meet Jim Putt,” pages 55-59.

This is a series of biographies about people related to the amusement park industry. To read more biographies, click here.