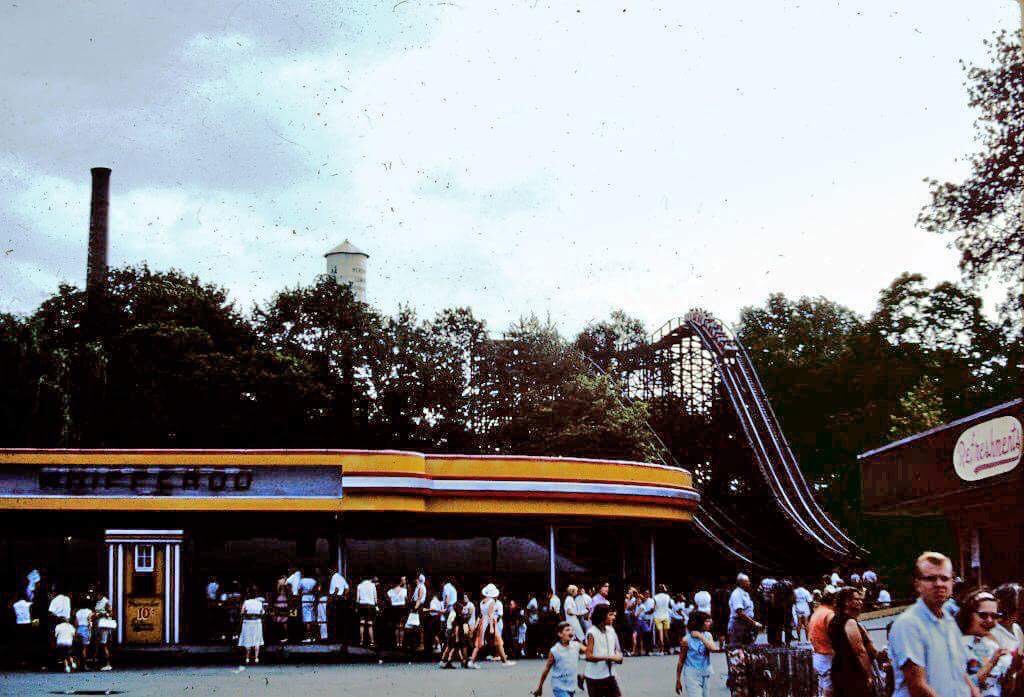 The Whip was one of several rides mentioned in 1919 as being planned to be added to the park in the upcoming years. However, due to poor investments in sugar futures, the Hershey Chocolate Company found itself in receivership – being controlled by a bank from New York.

As a result, plans for installing any new rides in Hersheypark in the early 1920s were cancelled. Once the company exited receivership – the town got it's company back – new rides began appearing in Hersheypark, starting with the park's first roller coaster, The Wild Cat (originally, The Joy Ride from 1923 to 1934).

The ride was constructed in a space near The Bug, and did not have a roof. Whip was the 20th ride Hersheypark installed, and was the 16th ride in the park in the 1937 season. A roof would be added to the ride in the following season; this was built by the Philadelphia Toboggan Company.

Mangels produced a variety of different sized Whips. Hersheypark purchased a 12 car Whip. Other models include a 16 car variant, one of which continues to be in operation at Kennywood Park in West Mifflin, Pennsylvania (in the suburbs of Pittsburgh).

The Whip was originally given the name Whipperoo, and used this name for many years. In 1964, a kiddie Mangels Whip would be installed and would also be called Whipperoo. It doesn't appear that both rides having the same name ever confused anyone, especially since there weren't any park maps produced. Even when there were, beginning in 1972, the kiddie rides were not labeled, except generically as "Kiddie rides."

The ride remained in the hollow location until the end of the 1972 season. Some stories about the flood of 1972 suggest that the Whip was destroyed in the flood, but this is not the case. The Whip can be seen on park maps from 1973 and 1974, and on a park souvenir map from 1975. The ride was relocated to the Hill, in a spot approximately where part of the fun house Funland stood until the end of the 1972 season.

When the ride was relocated in 1973, the roof was not. So for the final three seasons, the ride operated uncovered, as it had been in it's first. The ride was also renamed The Whip, but was simply labeled Whip on the 1974 and 1975 park souvenir maps and rides lists in the park's press kits.

The Whip was retired after the 1975 season. When Midway America expanded in 1997, a new version of The Whip was added to the park. This was a homage to this original Whip. Part of the concept of Midway America was to bring back rides the park used to have.

Footage of The Whip can be seen at the end of this video of Hersheypark in the Summer of '75.

Where the Whip was, today

For the Whip's Hollow location, 1937-1972, it is mostly part of the midway in front of sooperdooperLooper's station and maintenance area. The Whip was not right along the creek because the Miniature Railroad ran behind it.

For the Whip's Hill location, after the ride was removed, Mini Comet and another kiddie ride, OutBoard Motor Boats, was relocated to that spot. In 1977, Mini Comet was slightly adjusted to accommodate the relocation of Himalaya, which had to be relocated from the Hollow due to the addition of sooperdooperLooper.

In 1978, ZooAmerica opened, and a bridge over Park Avenue was added, creating a park entrance for ZooAmerica right in the general area as Himalaya and Mini Comet (Mini Comet was removed after the 1978 season, and OutBoard Motor Boats was relocated to a spot near Dry Gulch Railroad after the 1979 season).

After the 1989 season, Himalaya was removed and replaced with Flying Falcon. Though not on the exact same spot that Himalaya occupied, it was in the same general area. Flying Falcon was then removed and placed in storage after the 2016 season. The space is now home to two kiddie rides, Convoy and Frog Hopper.