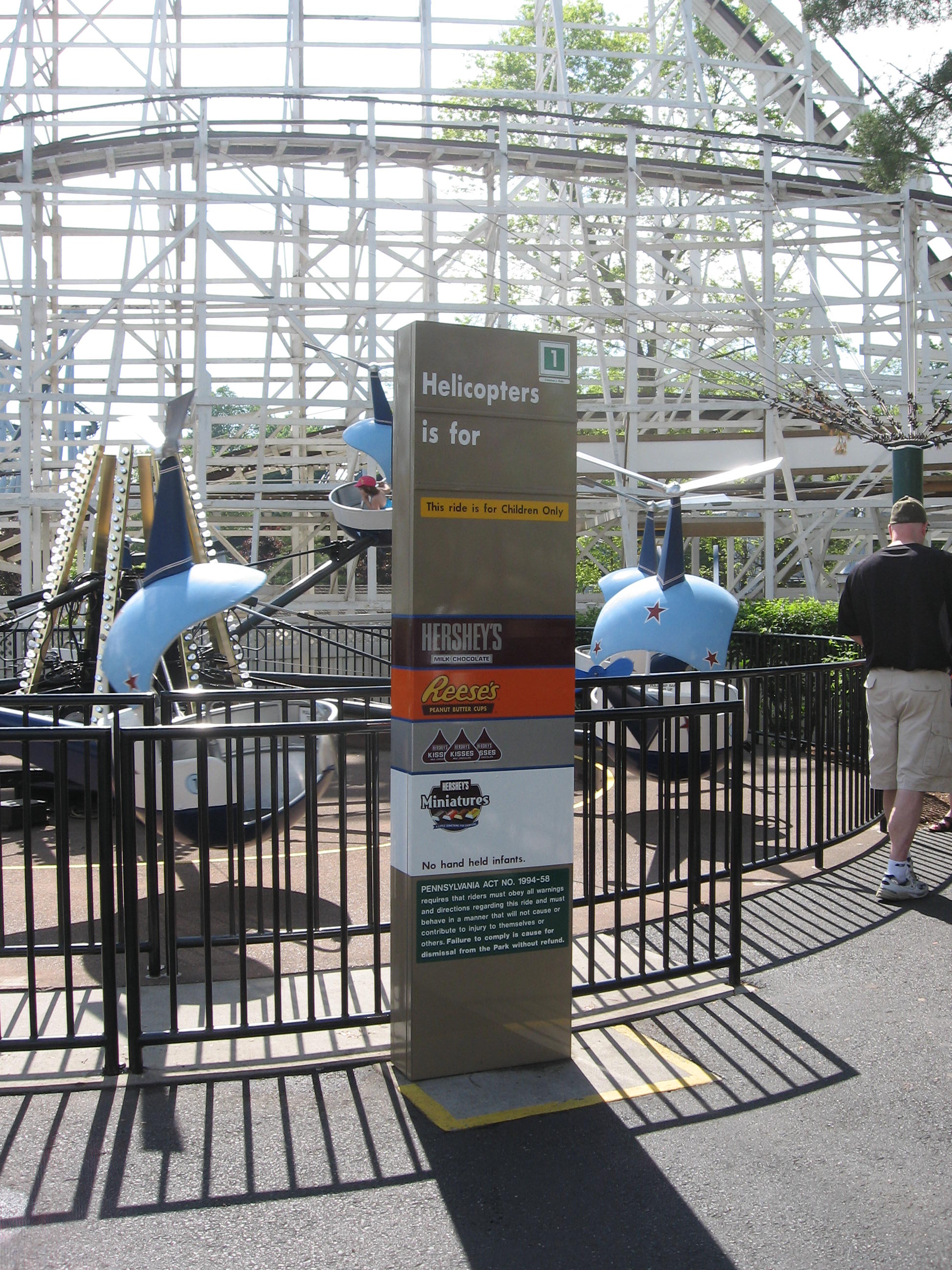 In 1915, Allan Herschell created a new company independent of the Herschell-Spillman Company, and named it Allan Herschell Company. They went on to produce a number of classic rides, six of which were built for Hersheypark. Only one of those six still operate in Hersheypark today.

Ferris Wheel (1926) was located near the Skooters building, which was eventually replaced by The Pretzel in 1931. This was a small, six car ride. Different animals were featured on the doors of each car.

Airplane Swing was originally called Aeroplane Swing – this was installed at a time when the United States had yet to standardize the name of a plane to airplane, as opposed to the United Kingdom’s usage of the word aeroplane. This ride had 5 airplanes that rotated in a circle.

Both rides remained in operation through the 1960 season, after which they were replaced. They were replaced by two Hampton Amusement Company rides, which you can read about here.

Two years later, Hersheypark purchased another ride from Herschell, this time a sailboats kiddie ride. Originally called Children’s Motor Boat Ride, this was placed adjacent to Ferris Wheel (1926) and Airplane Swing. In the ride’s later years it was called Sailboats. In 1961, the ride was relocated from it’s original location to the location formerly used by Airplane Swing. Sailboats was retired following the 1975 season, and was replaced by Ladybug, which still operates in the park today.

In 1935, Hersheypark purchased another Herschell kiddie ride, this time an automobile ride. Called Automobiles, this was also placed adjacent to the three other kiddie rides Hersheypark had. Similar to the Sailboats ride, the ride went in a small circle, but instead of having boats, there were small automobiles to sit in.Automobiles were removed following the 1975 season.

This would be the only four kiddie rides Hersheypark had until 1949. Hersheypark wouldn’t acquire another ride from Herschell for nearly three decades. A side note to this – Hersheypark purchased a kiddie Horse & Buggy ride in 1949 which is mistakenly said to be a Herschell ride. This is actually a Traver Engineering Company ride, as mentioned in The Billboard on November 27, 1948.

The final Herschell ride Hersheypark purchased was in 1964. This was Helicopters, which quickly became a popular ride for kids. The ride went in a circle, but the helicopters were controlled by a lap bar. The child could pull on the lap bar to make their helicopter go up, and release it to make it go down. This ride was so popular that in 1972, it was one of three kiddie rides relocated to Carrousel Circle (the others were Space Age and Traffic Jam).

To read more about amusement park manufacturers that have manufactured rides for Hersheypark, click here.