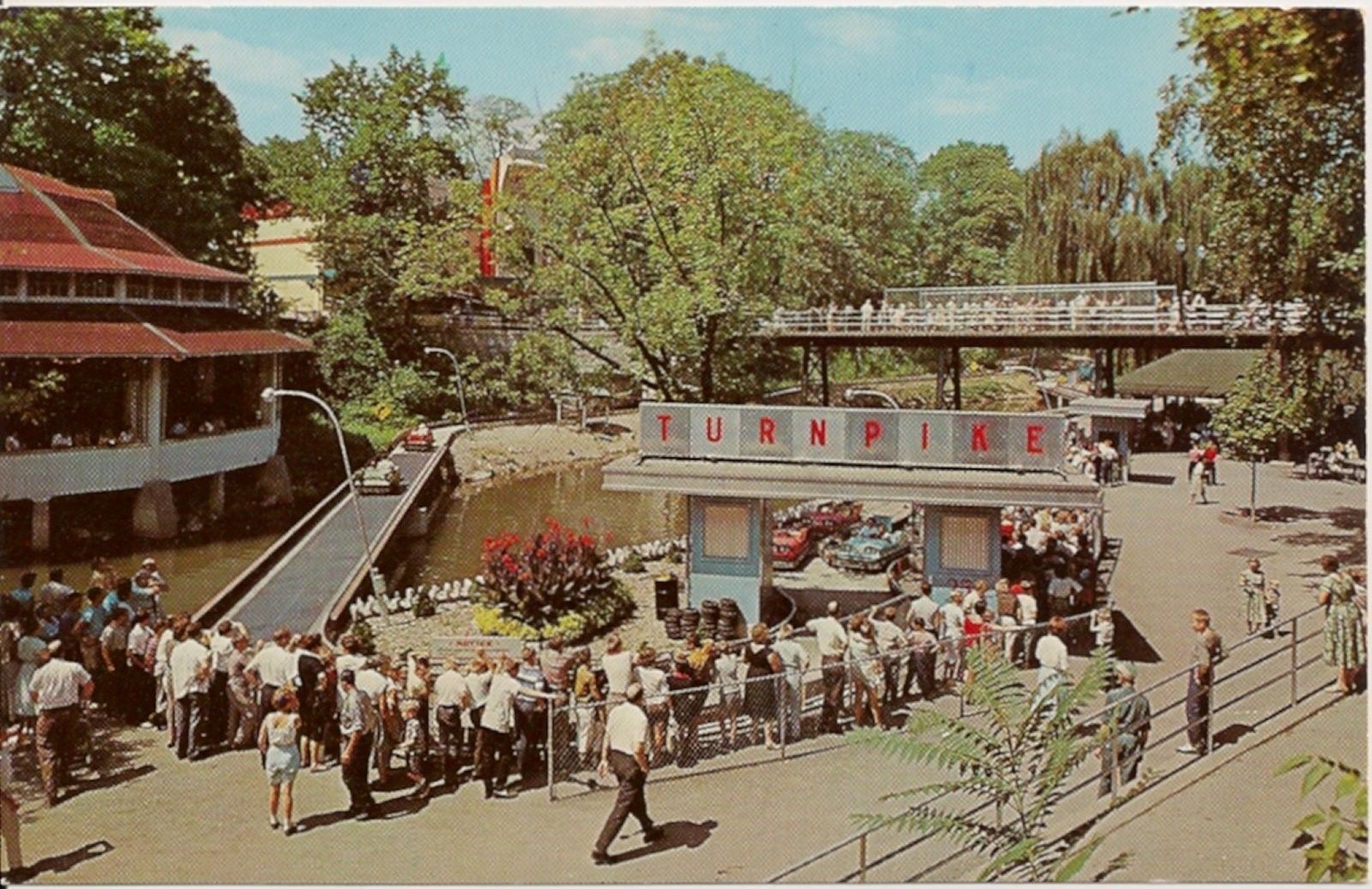 Hersheypark has had 5 different Turnpike rides over the years. This article is about the third Turnpike ride simply called Turnpike.

Turnpike was constructed in the hollow, with the station designed to look like a toll booth, located across from the Carrousel. The ride opened in 1960. The cars were manufactured by Streifthau Manufacturing Company of Middletown, Ohio. The cars they manufactured were known as Streco Turnpike Cruisers.

The course crossed Spring Creek twice with a short tunnel and a large turnaround not too far removed from Park Avenue. The rails for the car were on the outside of the vehicle. This resulted in the cars frequently being damaged.

When the renovations at Hersheypark were proposed by R. Duell and Associates, one of the rides planned to be replaced was Turnpike. The turnpike track would have been developed into a double turnpike that shared a station. One course would have utilized most of the original track while the other course would have gone further down the creek towards where sooperdooperLooper is today. This concept was ultimately decided against and the plan for a double turnpike was then switched to a location on the hill.

In 1972, Hersheypark experienced flooding from Hurricane Agnes, which caused a bit of damage to the Turnpike. Several cars were sunk or swept away by the flooding. Fortunately, it was only those several – the ride was able to resume operating after the flood. It had been commonly believed that the Turnpike was closed after the flood of 1972, but this has been shown to be false.

The Turnpike operated in the 1973 season. It was due to be replaced by that double turnpike now devised as the Twin Turnpike in 1974; however, economic issues from the oil crisis and cost overruns in the renovations caused Hersheypark to postpone the installation of the the Twin Turnpike and the Kissing Tower.

There is some indication that Hersheypark planned to operate the Turnpike in 1974. A truncated version of the ride can be seen on the 1974 map of the park from the rack brochure. However, the 1974 souvenir map does not have Turnpike on it. Images from 1974 also show people walking across one of the former Turnpike bridges, giving a confirmation the Turnpike was no longer in the park in 1974.

The turnpike bridges were converted into pedestrian walking bridges when Turnpike was removed. The two bridges remained in the park until the end of the 2003 season when Storm Runner was built. The path on that side of the creek was closed off because part of Storm Runner’s course was built there. You can still see the tunnel in the park if you look past the Tea Cups ride currently in The Hollow.

The Turnpike station was used as a covered pavilion into the 1980s. It was removed sometime in the middle of the decade.

To read more on the other Turnpike rides, click below.