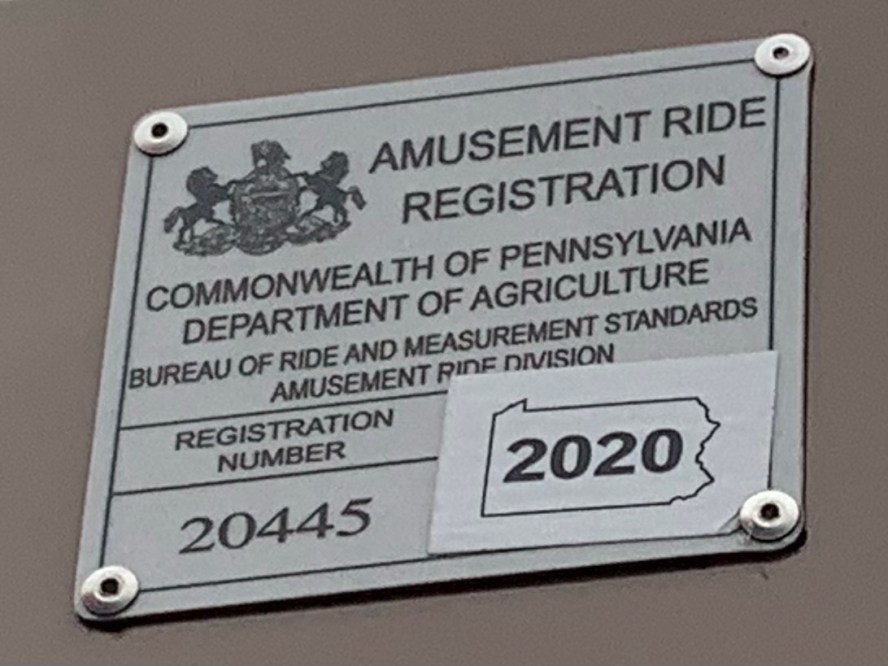 On June 14, 1984, an act – providing for the inspection of amusement rides and attractions; granting powers and imposing duties on the Department of Agriculture; creating the Amusement Ride Safety Advisory Board; and imposing civil and criminal penalties – was entered into Pennsylvania law as P.L. 384, No. 81, the Pennsylvania Amusement Ride Inspection Act. It was signed by Governor Dick Thornburgh on June 18, 1984. This Act went into effect on January 1, 1985.

A notable incident involved a ride which was part of a traveling amusement company and was not permitted to operate in Maryland due to issues with the ride. The company, a few months later, operated the same ride in Pennsylvania, where no such inspection was required. One night during operations, a rider was injured due to a malfunction with that ride. Maryland had effectively prevented an accident from happening in their state, but Pennsylvania had not.

On a local level, rides were being inspected by amusement parks, carnivals, and fairs, on a logical, but voluntary, basis. There wasn’t any oversight from the Commonwealth of Pennsylvania. This Act worked to change that, creating the Bureau of Rides & Measurement Standards in the Department of Agriculture.

The Act took time to develop in the Pennsylvania General Assembly. As the legislation evolved, it was first proposed to fall under the commonwealth’s Insurance Department and then under Labor and Industry. Eventually, the legislation was amended that it enforcement would be assigned to the Department of Agriculture. The Department of Agriculture was chosen because of how many amusement rides operated at county fairs in Pennsylvania. County fairs were already under the purview of that department.

The main portions of the Act were intended to ensure several things about amusement rides – 1) that amusement rides were properly insured in the event of injury to a rider and 2) the commonwealth could prevent injuries from occurring by having the ability to close rides that were shown to be dangerous.

The Amusement Ride Safety Board was intended to be representative of all interested parties in regards to the safety of amusement rides. From the text of the Act:

The powers and duties of the board were to advise and consult, hold public hearings, and submit recommendations. This meant that the board could propose rules, regulations and standards to prevent circumstances which could be detrimental for the public, based on reasonable evidence. The means to propose such rules, regulations and standards would be through public hearings. After the board would approve such rules, etc., they would be submitted to the Department of Agriculture.