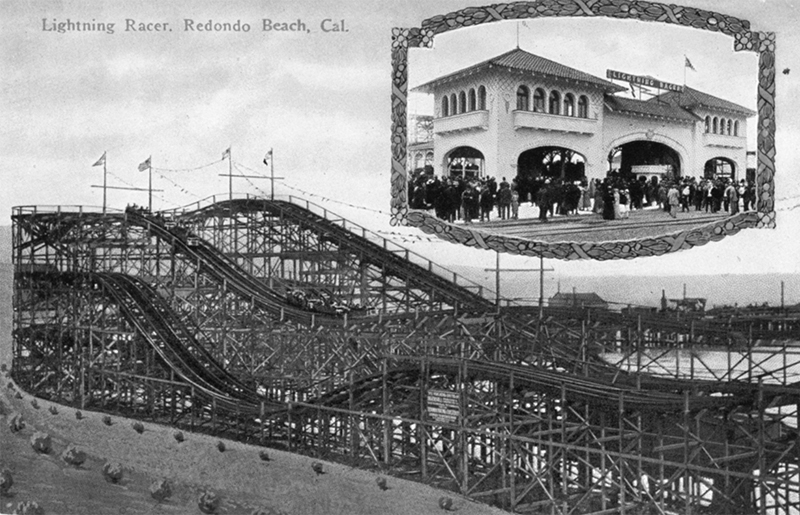 The coaster was built under the Redondo Beach Racing Coaster Company. The designer was John A. Miller and the builder was Charles Paige, Miller’s West Coast representative. Both tracks were 3,000 feet long, and were located on a pier over the Pacific Ocean. Lightning Racer successfully operated in the 1913 season, opening on Memorial Day, May 30.

A storm in February 1914 caused some damage to the ride, but that was quickly fixed.

On April 30, 1915, a bad storm system moved into the Redondo Beach area. The storm caused substantial damage up and down the beach, including the pier Lightning Racer was on. Despite the bad weather, thousands of people gathered to watch the pier, and the roller coaster, slowly break and collapse. By 9:30 pm, more than half of the Lightning Racer collapsed into the Pacific Ocean.

By 6 [pm] o’clock thousands of persons had gathered along the waterfront and watched the Lightning Racer, valued at $150,000, slowly crumble. Falling from a height of 100 feet the superstructure of the racer fell with a terrific crashing of timbers. The huge structure fell in four sections, and by 9:30 o’clock but two sections of the structure was left standing. This includes the front and a portion of the trackage. Awe-inspired and curious persons crowded close to the big framework until specially deputized policemen drove the people back and established a danger zone.

The ride was rebuilt and was back in operation by the summer of 1915.

In August 1915, an incident was reported that someone riding Lightning Racer decided to stand up during the ride to make it more exciting, and they fell off. The person ended up with a broken arm and a big cut on their head. In October 1923, a person was killed while attempting to transfer from one car to another during the course of the ride.

There is also a roller coaster called Lighting Racer at Hersheypark, installed in 2000. You can learn more about that roller coaster in this article about Midway America.