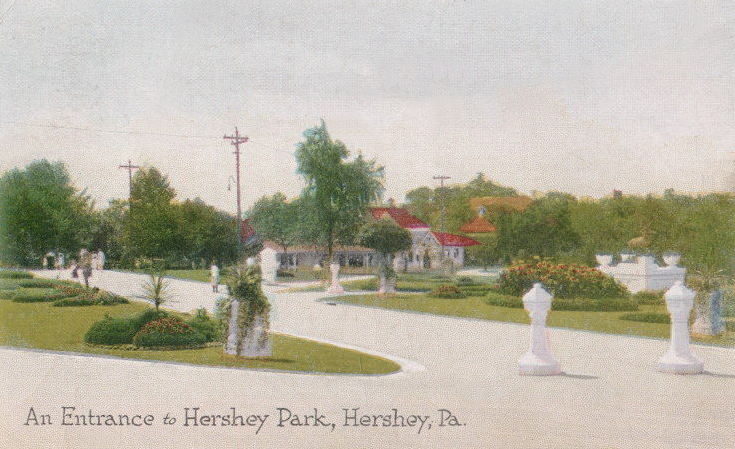 This is a look at the original main entrance for Hersheypark from 1906, when the park opened, until 1970, the last year the park operated without a proper gate. In 1971, the park’s central area was enclosed with a gate reducing the park size from a stated 500 acres to 65 acres.

On Memorial Day 1906 (also known as Decoration Day), May 30, Hersheypark was formally dedicated. They had a series of events for the day including a couple of baseball games (which the Hershey club won). Most park-goers of the day would have entered the park at a spot along Gravel Hill Road (renamed Park Avenue a couple of years later), just north of the Reading Railroad lines connecting Hershey with Palmyra and Hummelstown.

This spot was considered the main entrance to Hersheypark, although some would have entered from West Derry Road, where the park’s tennis courts were.

In 1913, park management renovated the main entrance area at Park Avenue and Park Boulevard, adding several statues including the Elk statute which quickly became a popular photo spot. When the park opened for this season, this region of the park was formally designated as the main entrance.

This didn’t mean that people could only enter at this location – many people still entered the park through a pathway that connected with West Derry Road, at the north end of the park.

Over on the west end of the park, Hersheypark constructed a new building for the new Dentzel Carrousel they purchased in 1912. This was built in the west end, on Park Boulevard – one of the furthest west placed rides in the history of the park. After the 1912 season, a new dancing pavilion, Hershey Park Ball Room, was constructed adjacent to the Carrousel, which drove a lot of traffic to that area of the park. Two year later,  the Convention Center (also known as the Ice Palace, and the former Hershey Museum) was constructed. So within those couple of years, a fair number of people would now enter the park from the west end rather than downtown.

Nevertheless, most people entered the park from the main entrance.

As the years progressed, this entrance area didn’t change extraordinary much. Most of the area was like a garden, and it stayed that way through 1970. The Elk statue installed in 1913 remained in the same location through the 1972 season. The largest changes were to a pavilion constructed just beyond the entrance area, bordering it (not the original pavilion which later became the Penny Arcade). That pavilion became a souvenir building, and that building was torn down and replaced in 1940 – that building is still in the park today.

When park management decided to renovate the park and go with the R. Duell & Associates plan, the park decided to move the entrance of the park to the west end, where the Sunken Garden was at the time. In the 1971 season, the park was gated, and there were five entrances to the park, one of which was at Park Avenue and Park Boulevard.

To read an overview of Hersheypark’s entrances, click here.