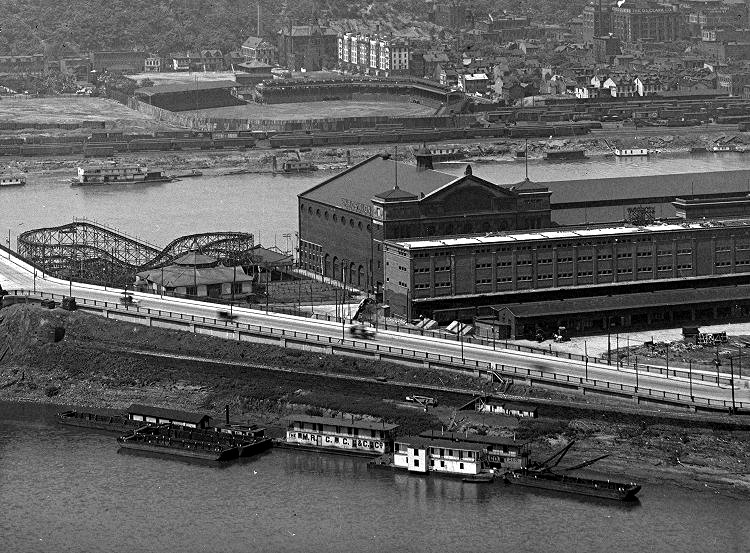 The Greater Pittsburgh Exposition was an annual event which occurred in the fall of each year between 1889 and 1916. The exposition was located where Point State Park and PNC Park are in Pittsburgh today. The grounds were spread between downtown Pittsburgh and the city of Allegheny (today the North Shore).

This may be the first instance of a twin roller coaster operation.

The twin coasters opened on September 4, 1895. They were each five hundred feet long, for a round trip of one thousand feet, cost $10,000 to construct, and cost a nickel to ride. It was manufactured by James A. Griffiths, of Connecticut, who made several other switchbacks in the Pittsburgh area. In 1896, the coasters were renamed Gravity Railway.

Built at a cost of $15,000 in 1901, this coaster was built because a large fire destroyed a significant part of the Exposition grounds, including the Switchback Railway. The fire occurred on St. Patrick’s Day 1901, and property loss was reported at a value of $242,000.

Toboggan Slide was reconstructed in the 1911 season and continued operating each season until the Pittsburgh Exposition closed after the 1916 season.

Table of inflation adjustments for costs mentioned in this article.

To learn more about the Greater Pittsburgh Exposition, check out Pittsburghhockey.net which discusses the Winter Garden, one of the buildings that was part of the expo, and The Brookline Connection, which also discusses Exposition Hall. This blog post from That’s Church in 2013 also gives some good background on what was around the Point in the late 19th Century / early 20th Century.