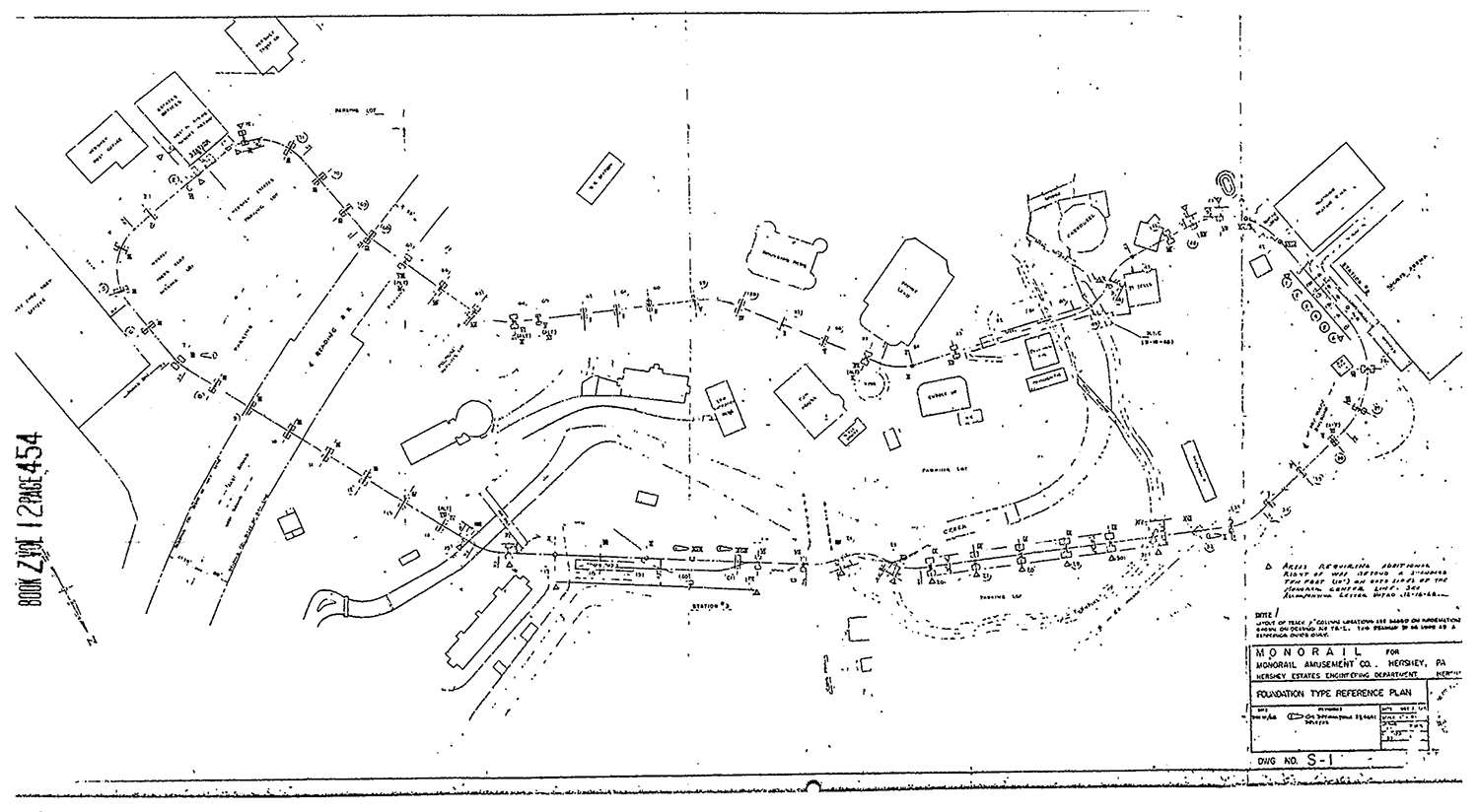 The Monorail Amusement Company was formally established by an agreement between Hershey Estates (today, Hershey Entertainment & Resorts Company) and Hershey Foods Corporation (today, The Hershey Company) on February 12, 1968. It was submitted to Dauphin County Recorder of Deeds and put into public record on March 31, 1969 – this is known as the “1969 Agreement.” This agreement featured description of the land which the Monorail would occupy, as well as the foundation of a new company, the Monorail Amusement Company.

This agreement had several conditions. First was that Hershey Foods retained the right to revoke any (or all) rights of way by September 10 of any year. In this case, the “right of way” is referring to the Monorail track and station on Hershey Foods property. This means that if Hershey Foods didn’t want the Monorail on their property any longer, they had to give Hershey Estates written notice at least six months prior to September 10, which is April 10.

Hershey Estates would then be required to dismantle and remove the Monorail from Hershey Foods property as soon as reasonably possible. At the time this meant no later than September 10, as the park season normally ended on Labor Day.

The second condition was that if Hershey Foods did enact the first condition prior to September 10, 1978, it would reimburse Hershey Estates for the reasonable cost of the equipment and relocation of the track. However, Hershey Foods would not be responsible for paying for any extension of the system, even if an extension was necessary due to the request of removing the track from their property.

…In 2014, [The Hershey Company] began discussions with [Hershey Entertainment & Resorts] pursuant to its rights under the 1973 Agreement and requested [Hershey Entertainment & Resorts Company] to relocation a portion of the Monorail that passes over the main entrance of [The Hershey Company’s] office building at 19 East Chocolate Avenue, Hershey, Pennsylvania….

— The Monorail Agreement, Right of Way And Easement, reached on November 29, 2016, between Hershey Entertainment & Resorts Company and The Hershey Company.

The companies agreed to 11 terms in this agreement. These terms included Monorail Relocation Work, Monorail Easement, and that this agreement superseded the existing 1969 and 1973 agreements.

About a month before an agreement was formally reached, The Hummelstown Sun published an article stating that the Monorail was to be slightly relocated. The agreement was then reached on November 29, 2016, with relocation work beginning promptly on January 6, 2017. Track relocation work was completed by March 2017.