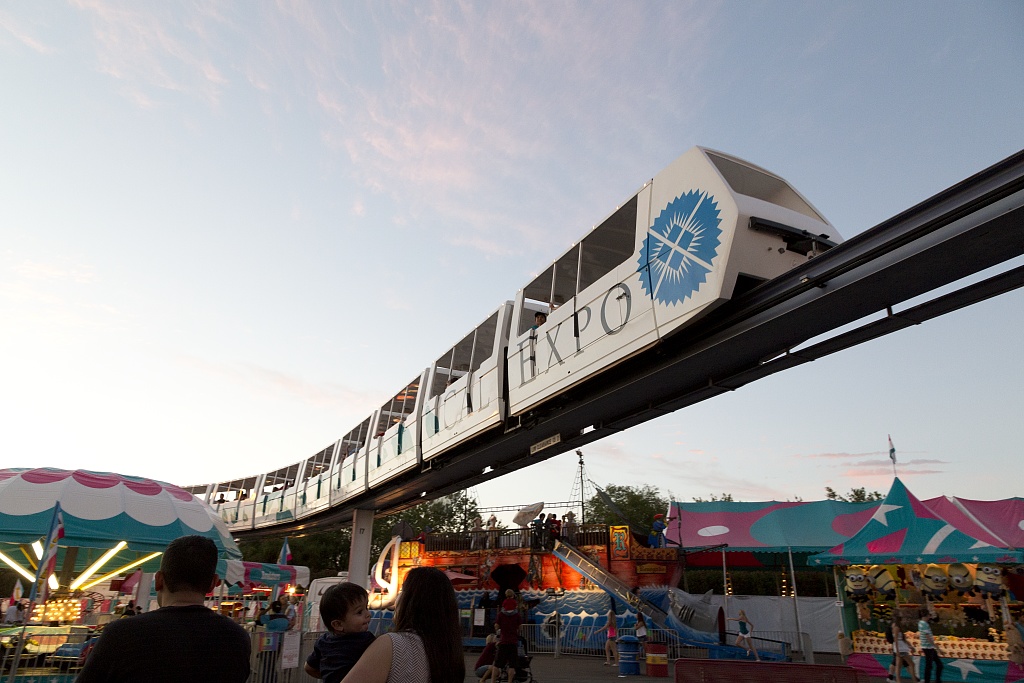 Universal Mobility, Inc. (UMI), manufactured two minirail systems in California, in 1968 and 1971. These were the first and third systems UMI manufactured for Habegger in the United States. The latter of the two is Metro, which the history of the ride is tied in with Hersheypark’s Monorail. The earlier is UMI’s first system, which operates at the Cal Expo in Sacramento. These were the other two UNIMOBIL / Habegger Type II minirail systems produced, with Hersheypark’s being the third.

Metro opened in 1971. The ride was installed at a cost of $1.8 million ($10.6 million in 2016 US dollars). There were three stations at various points around the .75 mile (1.2 km) course – in the High Sierra Territory, Colossus County Fair, and Samurai Summit regions of the park. A picture of Metro under construction can be seen here.

The trains were initially painted solid colors, such as blue, green, and yellow. This pattern was identical to the look of Hershey’s trains. The trains were eventually repainted to look different at various times over the years Metro was in operation.

Metro was closed in 2001. The ride remained standing, but not operating, for a decade before the Metro trains (and some transfer track) were sold to Hersheypark. The trains have remained in storage at Hershey since arriving in late May 2011, while some parts of Metro remain standing in Magic Mountain.

The Monorail at Cal Expo was installed in 1968 by UMI when it was called Constam Corporation, UMI’s original name. This project came about in the wake of the popular Expo ’67, in Montreal, Quebec. Habegger Machinenfabrik constructed the Minirail systems for Expo ’67.

They were turning their attention to the American market, as monorails had become popular in the United States. Habegger licensed the rights to their monorail system to a company based in Salt Lake City, Utah, Constam Corporation – later Universal Mobility, Incorporated.

In 1966, the California State Fair was being converted into a modern fair called the California Exposition. Work on the renovations began in August 1966. In December 1967, the Expo approved constructing a minirail system, similar to the one that was seen at Expo ’67. The Monorail built at a cost of $2.3 million ($15.8 million in 2016 US dollars). The system is 1.3 miles long and featured six 8-car trains. It could transport 4000 passengers per hour.

This system was built to provide scenic views of the California Exposition grounds. There is one Monorail station, located right at the main entrance. The ride was completed in 1968, but did not operate for the general public until 1969. This was because the ride went over parts of the grounds which were not completed for the 1968 season. A private investor helped bankroll the minirail system’s operating costs when the ride opened for the 1969 season.

While the Exposition has events which operate year round, there is a two week period in the summer which is the traditional California State Fair. In recent years, this has been the only time of year the Monorail has operated.

This was a look at the minirail systems UMI built in California. Next, we’ll look at the three Tourister systems that were operated at Carowinds, Kings Island, and Kings Dominion.