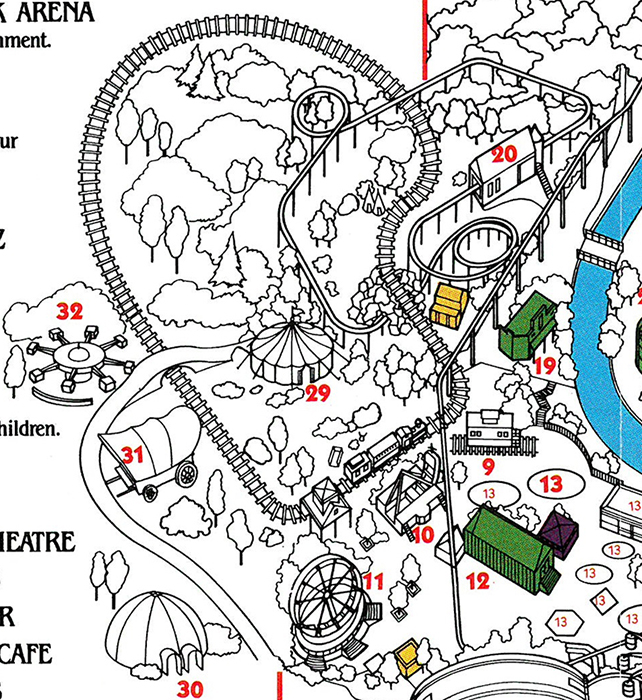 In 1983, Hersheypark decided to add a new theme area to the park, continuing the expansion of the park beyond Dry Gulch Railroad, Cyclops, and CinemaVision, the area then named Odyssey Alley.

The plan called for adding the new themed area over the following two seasons, adding some new rides and relocating some existing rides. For the 1984 season, this area was called “Old West.” In 1985, it was permanently named Pioneer Frontier. While Pioneer Frontier continued to be expanded years later, this article will look back on the main expansion in 1984-1985.

Hersheypark expanded in 1984 by adding two new rides – Conestoga and Timber Rattler. The park also expanded Dry Gulch Railroad to go in a complete circle instead of a figure eight. The path was expanded beyond CinemaVision to Pirate Cove Catering (renamed Dry Gulch Galley Catering for the 1984 season) inside the Dry Gulch Railroad circle. The new area was given a name – “Old West” – with the area to be developed over the two seasons 1984-1985.

Conestoga was an Arrow-Huss pendulum ride. The car was made to look like a conestoga wagon. The ride spun in a complete circle, with the car swinging back and forth until it got enough momentum to swing the whole way around.  The ride was installed just beyond CinemaVision. Conestoga was in the park until 2002, replaced by Frontier Virtual Theater for several years, and then The Howler in 2008. Conestoga currently operates at Lake Winnepesaukah in  Rossville, Georgia.

Timber Rattler was a Carousel Holland BV manufactured ride. This was essentially an updated version of the Monster, which operated in the park from 1972-1982. Unfortunately, this ride was prone to breakdowns and wasn’t well made. Several instances of injuries ultimately resulted in the ride being removed from the park following the 1987 season.

The path that connected Timber Rattler and Conestoga with Dry Gulch Galley Catering was extended down to Trailblazer Hollow. This new path was called Canyon Pass.

A food court was installed, and over the years included food options such as Taco Shell, Taco Bell, Moe’s, and Chickie’s and Pete’s. There was a gazebo in the middle of the seating area where performers could entertain. With the food court being installed, Dry Gulch Galley Catering was relocated to the other side of the path connecting Canyon Pass with Conestoga. This is where Sidewinder would be installed in 1991.

One new ride was added: Granny Bugs. This was a remodeled version of OutBoard Motor Boats. It was relocated from the hill near Himalaya and placed adjacent to Dry Gulch Railroad, Cyclops and CinemaVision. Granny Bugs is a hybrid ride of two ride manufacturers. The core of the ride, including the motor, is a Hampton Amusement Corporation ride. The Granny Bugs cars were purchased from Venture Rides Manufacturing.