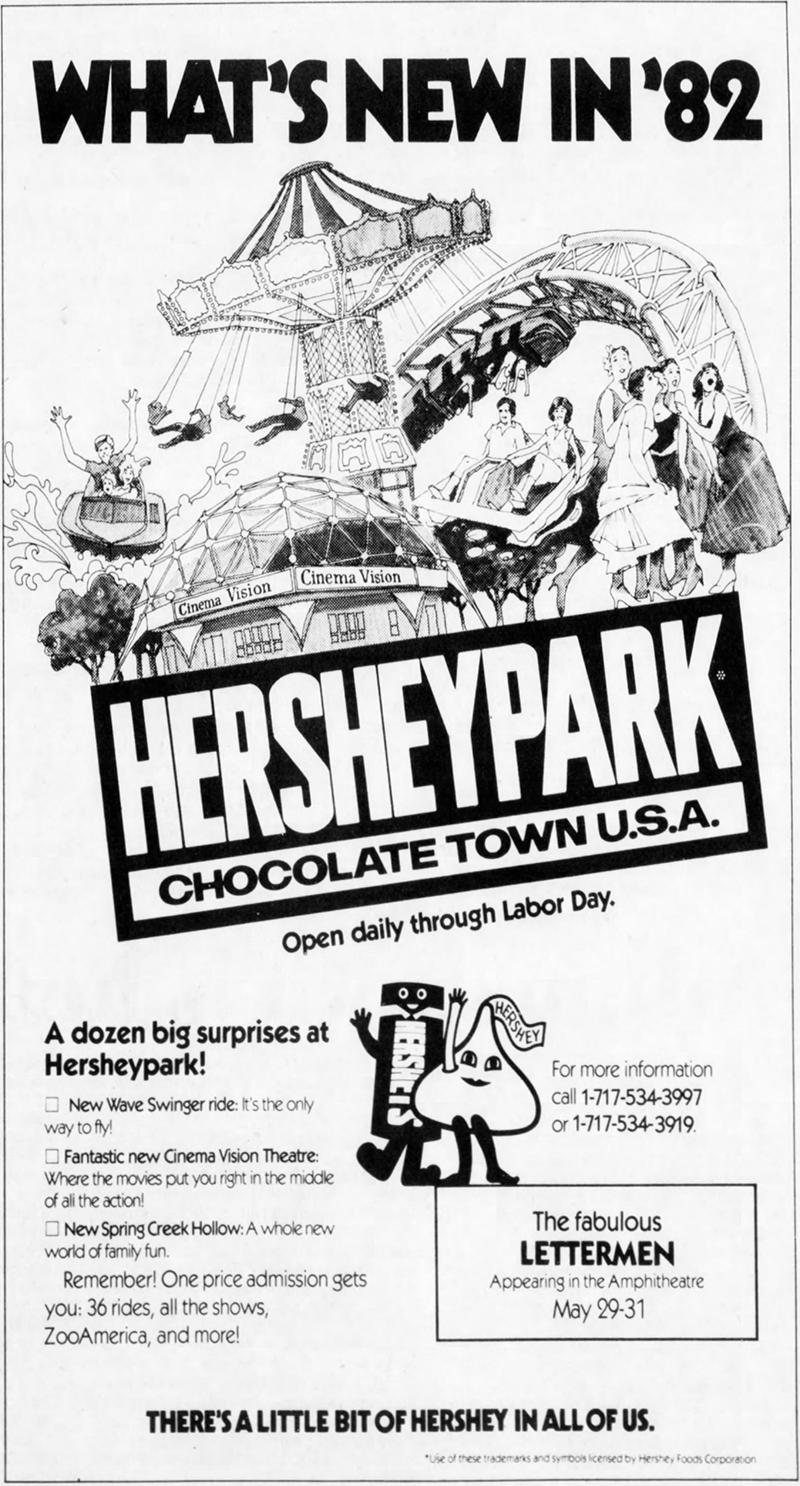 In 1982, Hersheypark made its first significant update to an area adjacent to Comet known as the hollow, since Comet was built in 1946. The park introduced Spring Creek Hollow. In the 1950s and 1960s, this area had been referred as the park’s “amusement center.”

While some adjustments were made in 1973 with the relocation of the Whip, the renovation in 1982 was an overhaul of the entire area. Several new rides and attractions were added to the hollow, and this area of the hollow was given its first proper name – Spring Creek Hollow. A Cinemavision was also added in another area of the park – this will be covered in a separate article.

The renovations included the retirement of a Traver Engineering Company ride, The Bug. This ride operated in Hersheypark from August 1933 through 1981, having been added to the park as part of the town of Hershey’s 30th anniversary celebration. The Bug reportedly operated at the Chicago World’s Fair (Century of Progress) earlier in 1933.

The Bug was replaced by Wave Swinger, which continues to operate in the park today. The Wave Swinger was manufactured by Josef Zierer and designed by Franz Schwarzkopf, brother of Anton Schwarzkopf.

A miniature golf course and paddle boat ride were installed in the park that included an extra fee. The miniature golf course was placed where Sooper Sizzler Cafe was, forcing that to be relocated to the building housing the Kiddie Auto Skooters. The Kiddie Auto Skooters were relocated into the lower level of the Fender Bender Building. The new food place was called Paddleboat Cafe, as it was located not far from the new Paddleboats dock (today, this is a Famous Famigilia’s stand as well as a slushie stand). The dock was located at the base of Comet’s first drop, underneath sooperdooperLooper.

The miniature golf course would remain in the park until the end of the 1997 season, when Great Bear was built. Paddleboats remained in the park through the 2006 season. The dry dock can still be seen today.

The area of the park was given a name: Spring Creek Hollow. This name only stuck for a few years, disappearing from documentation after the 1985 season. In 1990, this area gained a more permanent theme: Comet Hollow. It was rethemed The Hollow in 2012.