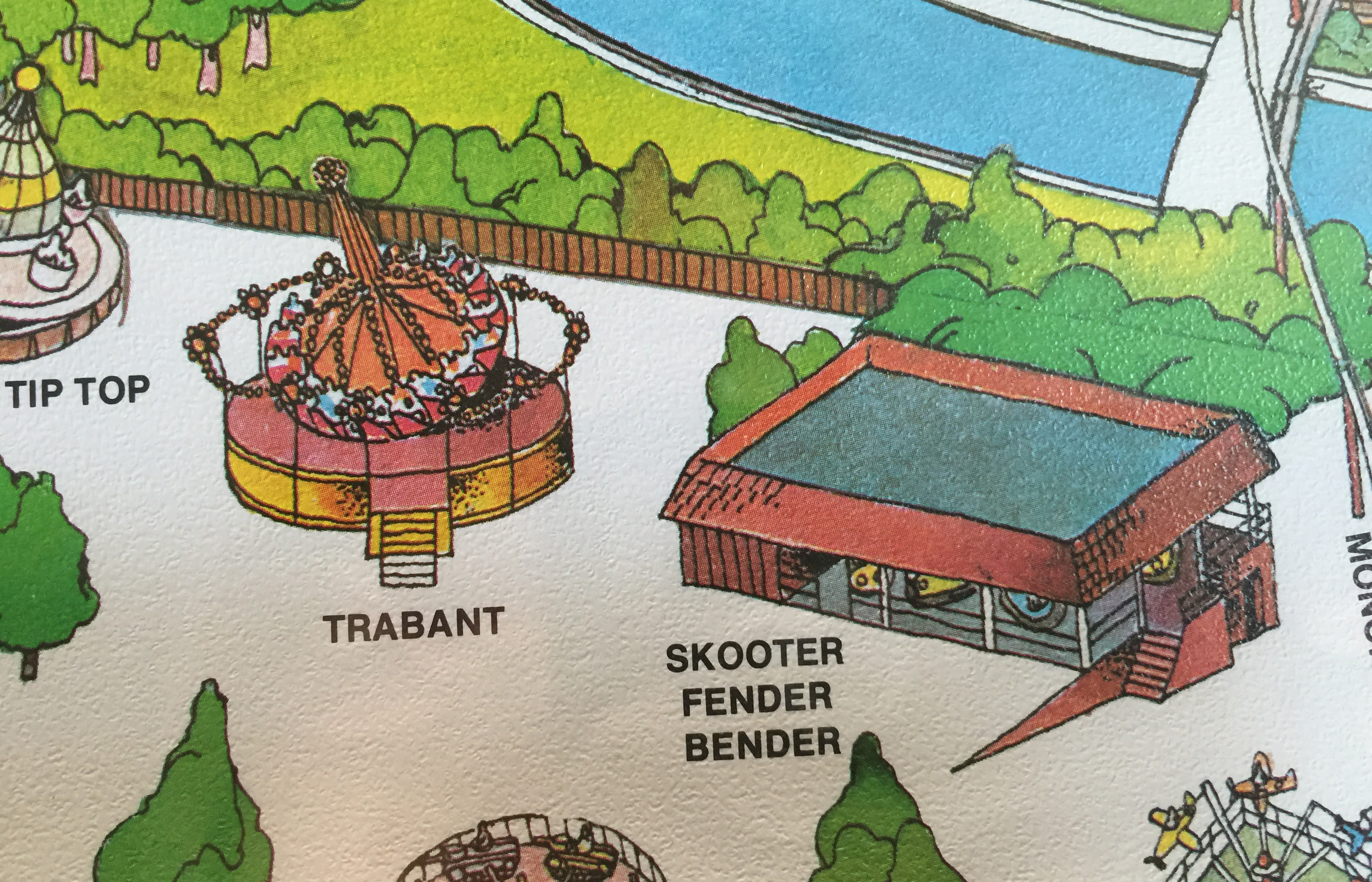 In 1970, Hersheypark hired amusement park designer firm R. Duell & Associates to create a new Hersheypark. By the end of 1970, R. Duell submitted a plan to Hersheypark which called for renovations to occur through five phases over a six year span, 1972-1977 (the fifth phase was actually expected to take two years, 1976 and 1977, although the newspaper illustration below only mentions 1976).

Hersheypark owner Hershey Estates tentatively approved the plan, with the park having the ability to modify the plan at their will. Renovations for Phase 1 and Phase 2 were then completed respectively in 1972 and 1973.

However, cost overruns, economic conditions, lower than expected attendance in 1972 due to the Flood of 1972, ultimately piled up on the park, forcing management to modify the R. Duell plan. A substantial amount of plans for the 1974 season were scuttled, with the installation of Kissing Tower and the Twin Turnpike delayed to the 1975 season.

In 1976, relatively few changes were made (several kiddie rides were retired, The Whip was retired, Mini Comet was relocated, and Ladybug and Kiddie Tanks ride were added).

Then in 1977, Hersheypark introduced sooperdooperLooper, the first modern looping roller coaster on the East Coast of the United States. The design of the building clearly was influenced by R. Duell’s designs, a commonality with another R. Duell designed park, Magic Mountain.

The old Metro station has a familiar feel to the look of the sooperdooperLooper station, and the ball light is similar to one’s at Hersheypark’s Monorail. Photo courtesy of R.D. Sussman-Dewberry, 2013.

Image of the sooperdooperLooper station from Google Maps.

After this point, while the R. Duell plan certainly called for the replacement of most of the rides in Hersheypark, the park would never really come back to the R. Duell plan in any form. The park began expanding outside the footprint of the park R. Duell anticipated – north beyond the former West Derry Road – in 1980.

However, that’s not to say that the park stopped renovating in the interim. An often overlooked, yet significant renovation occurred in 1978.

This renovation has been overlooked because it didn’t change any theming in the park; nor was it on the scale of the changes made in 1972, 1973, 1975, or even the addition of sooperdooperLooper the year prior.

Nevertheless, five rides were removed at the end of the 1977 season:

A lot of people preferred the Cuddle Up to the Coal Shaker, and ride operators had to wear ear plugs because the ride was very noisy. Coal Shaker remained in the park through the 1989 season, when it was replaced by three kiddie rides (Convoy, Dinosaur-Go-Round, and Red Baron) in the 1990 season.

Paratrooper and Round Up

Paratrooper and Round Up were replaced by Trabant, which was placed next to Fender Bender. Today, this is where Cocoa Cruiser is. Trabant was manufactured by Chance Rides and was eventually relocated to Pioneer Frontier and rethemed Rodeo. From 1985-1987, it was located in Pioneer food court. In 1988, it was relocated adjacent Conestoga to replace Timber Rattler.

Rodeo remained in the park through the 2008 season. With the expansion of The Boardwalk, called “The SeaQuel,” Hersheypark relocated Rodeo to Dutch Wonderland where it operates to this day as Twister. (In 2010, Hershey Entertainment & Resorts sold Dutch Wonderland to Palace Entertainment.)

Flying Bobs replaced Twin Towers Toboggans which had been sold after the 1977 season. Flying Bobs was built by Chance Rides and only operated in Carrousel Circle for several seasons.

Due to a variety of difficult maintenance issues, the ride was removed following the 1981 season and replaced by Balloon Flite.

Fender Bender is the bumper cars ride currently in Hersheypark. It was relocated from the hollow to the area where Paratrooper and Round Up were. This was a much larger building than what the bumper cars had been in, down in the hollow. This meant the ride could accommodate more cars, allowing more people to ride, allowing the line to move faster.

The fleet of cars expanded from 12 to 45 cars. The ride was called Skooter Fender Bender in 1978, with the “Skooter” part of the name dropped in 1979. Fender Bender is still in the park today, but the cars were replaced by a Reverchon model set of cars in 1997.

Kiddie Auto Skooters replaced the Auto Skooters in the hollow. Since the bumper cars were relocated for the 1978 season, it left a space open to have a kiddie version of the ride.

In 1982, they were relocated to the lower level of the Fender Bender building. Renamed the Mini Skooters, the kiddie bumper cars were removed following the 1995 season.