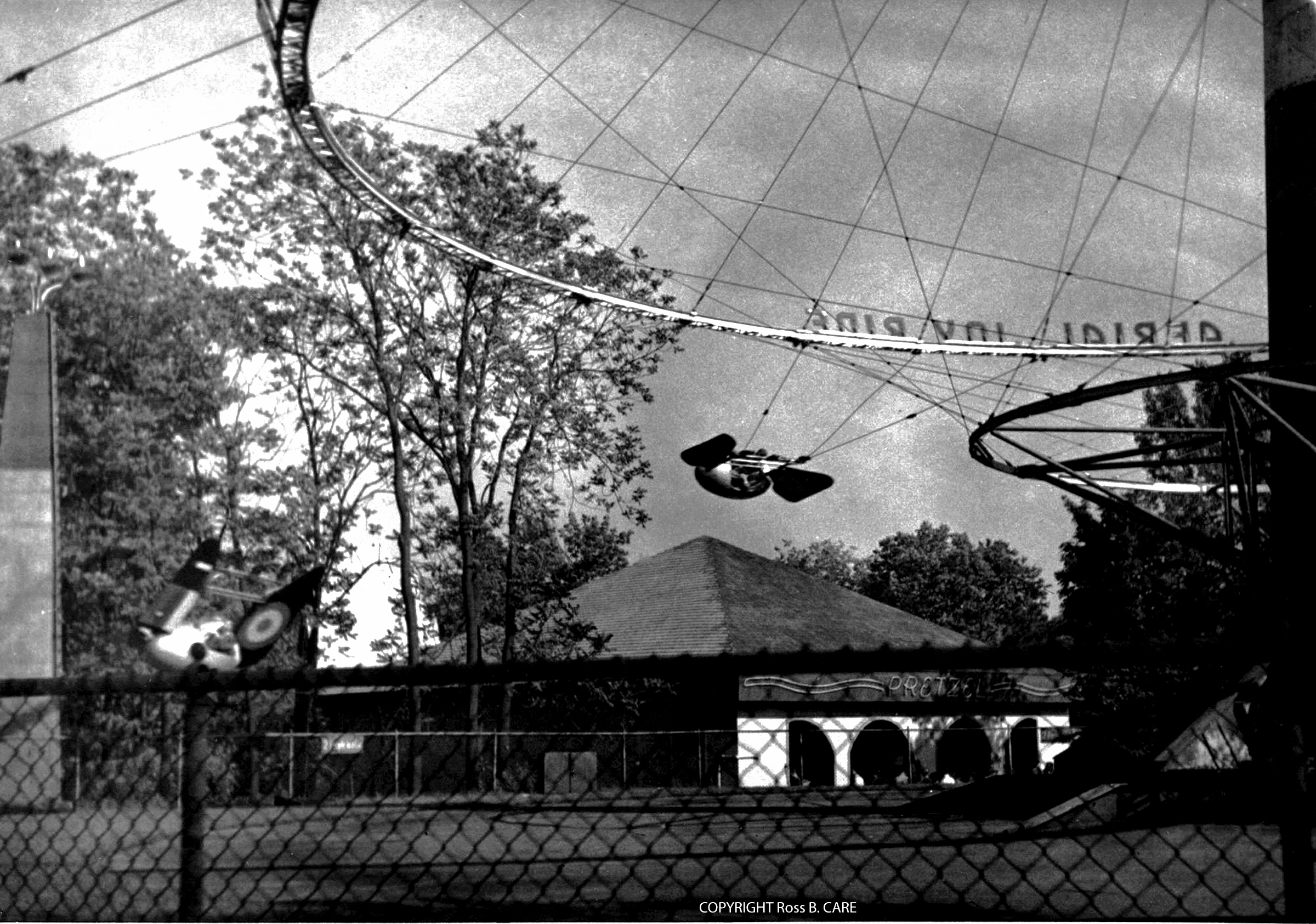 The ride was developed by Norman Bartlett and manufactured by Spillman Manufacturing, a company Bartlett had been associated with and eventually worked for (by the time Hersheypark purchased the Aerial Joy Ride, Bartlett was working for Spillman).

A description of Aerial Joy Ride in a 1939 World’s Fair souvenir book:

“Thrills without spills are afforded by the Aerial Joy Ride–a tall tower with sixteen two-seater ships suspended from a huge ring. Fore and aft rudders make it impossible for a fellow to “show off” at the controls, and the only danger is the possible loss of a hat.

After the Aerial Joy Ride operated for the 1939 season, at the World’s Fair, it was sent to Celoron Park, located in western New York, to operate during the 1940 season. Hersheypark then bought the ride in 1941.

While Aerial Joy Ride’s name comes from its origin at the 1939 World’s Fair, it was a name that the park continued using once they purchased the ride. Another ride, the park’s first roller coaster – The Wild Cat – was originally named The Joy Ride. The park kept the Aerial Joy Ride name in part because of the roller coaster’s original name.

Aerial Joy Ride was placed near The Pretzel, and a few of the kiddie rides, such as the Kiddie Airplane Swing. It was the park’s premier ride from 1941 to 1944, as it was the last ride installed prior to America’s entry into World War II. In 1945, as the war was winding down in Europe, Hersheypark installed a new ride – the PTC Carrousel still in the park today. Over time, the ride continued to operate as the area around it changed, such as the neighboring area being converted into Kiddieland in 1949.

The ride operated until 1961. A story that is commonly told is that the ride was removed because one of the cars broke off the ride and flew across that area of the park. This is story is false. However, the ride was removed and replaced with Hersheypark’s first European ride – Aero-Jets, manufactured by Kasper Klaus but purchased from Pontchartrain Beach in Louisiana.

To find where Aerial Joy Ride was in the park, the ride is located in Founder’s Way near Fender Bender, Mini Pirate, and Dizzy Drums.

The design of the Aerial Joy Ride was not unique; it was very similar to a ride manufactured by Bisch-Rocco Amusement Company called a Flying Scooter. Alvin Bisch, inventor of the ride received a patent for his amusement device in 1939 – before Bartlett’s Aerial Joy Ride debuted.

On April 3, 1943, the US Federal Court in Chicago decided the court case in Bisch-Rocco’s favor. Their decision allowed Bisch-Rocco to take ownership of all nine Aerial Joy Rides produced by Spillman.

It is unclear what happened with the status of the Aerial Joy Ride at Hersheypark, except that the park continued to own the ride itself. They must have made an agreement with Bisch-Rocco in the wake of the court decision.

Larson International, Inc., manufactures a modern version for parks today (Larson purchased the rights to the Bisch-Rocco Flying Scooters). One Larson installation is at Hersheypark and is called Frontier Flyers.