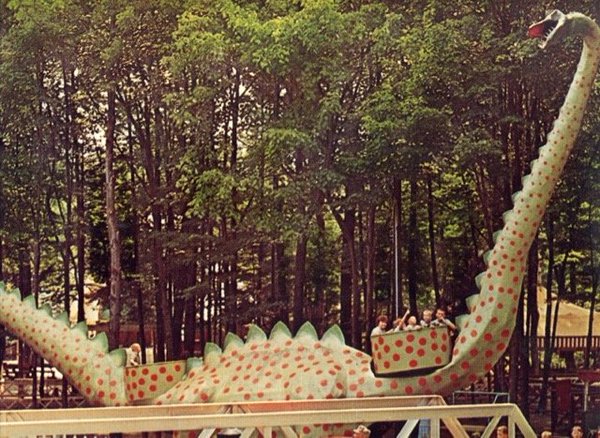 I was recently asked about a dinosaur themed ride that was at Knoebels. Let’s take a look at the history of the ride called Moon Rocker.

According to PennLive, the Moon Rocker was added to Knoebels in 1954. The ride was dinosaur themed.

A photo of Moon Rocker is the bottom right image in this Twitter post by PennLive celebrating Knoebels’ 90th anniversary. Someone replied to this post asking about the dinosaur ride, and Knoebels responded.

@mattjbaldo @PennLive It was the Moon Rocker ride & it had 2 tubs that would revolve. Popular in the 1950's! #KnoebelsHistory

It’s unclear how long the ride was in the park. It was still in the park in 1958, per this advertisement for the park’s 1958 season.

The ride was manufactured by Overland Amusements of Saugus, Massachusetts. This is the same manufacturer that made High Speed Thrill Coaster for Knoebels.