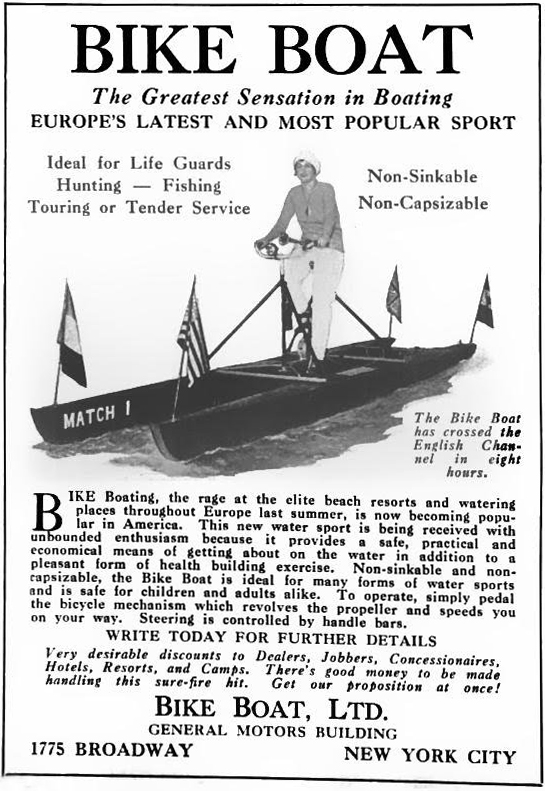 I recently wrote about a water ride at Hersheypark called Bike Boats. I wanted to look into the subject of the ride a bit more, so here is a look at the Bike Boats ride, one of the most popular attractions in 1930 and 1931.

Bicycle boats have been patented as far back as the 1890s. At the time, they looked a lot more like bicycles on skis.

By the late 1920s, the wheels had mostly been dropped in favor of a more sleek form. Peugeot Cycles, a French manufacturer of motorcycles and bicycles, and a subsidiary of famous automobile company Peugeot Automobile Company, decided to go into the water bicycle business themselves. They developed a device called a Bike Boat.

To promote the Bike Boat, Peugeot Cycles hired Aimee Pfanner to ride the craft across the English Channel. The trek reportedly took between 8 and 9.5 hours (promotional reports said 8 hours while British Pathé – watch the video below – reported it took 9.5 hours). Doing this gave the device a lot of press and the Bike Boat quickly became famous.

This is a silent film.

Peugeot immediately tried selling the device in the United States. They sold the sales rights for the American market to Harry Kramer, who created Bike Boat, Limited. This company operated out of the General Motors Building in New York City.

Bike Boat, Ltd., first debuted the Bike Boat device at the 1930 Motor Boat Show in New York City, at Grand Central Palace from January 17-25, 1930. They followed up their debut with a larger public display at the 1930 Los Angeles Boat Show which had greater publization. This event was at The Ambassador Auditorium from March 8 to March 15, 1930.

As part of the display, several women operated the Bike Boat. They were Kay Miller, Ida Schnall, Jeanne De Carva, and Flora Wood. Kay Miller raced against an Irish swimmer, Harry Devlin, to demonstrate the power of the bike boat.

Per an article in the February 1930 issue of MotorBoating (a magazine), the Bike Boat, “consists of two shells of specially prepared wood which support a framework similar to the mechanism of a bicycle. The motion of the pedals, however, instead of being transmitted to wheels, is delivered to a three-bladed propeller, which is capable of pushing the boat about eight miles an hour with little exertion by the operator. Steering is accomplished by handlebars connected to a rudder which is attached to one of the floats.”

Also per this article, the Bike Boat was about 3 and a half feet wide and 14 feet long. The advantage of this boat was that it could not be capsized or sunk.

The inability for the device to flip or sink was displayed by Ida Schnall who did a variety of tricks on the Bike Boat.

The popularity of the Bike Boat took off in America very quickly. It was labeled as “The Latest Sensation in Water Sports” in 1931. The Bike Boat could be found in many cities in America, as well as in many parks including Hersheypark in Hershey, Pennsylvania, and Bay Shore Park in Baltimore, Maryland.

The sensation of the Bike Boat quickly waned after 1931. A few other variants of bike boats appeared in the years after, including one version manufactured by Mar-Craft, Inc., of Clarence, NY, which debuted in 1947 after several years of development.

Bike boats are still around today, with a variety of different kinds being patented as recently as the last couple of years.